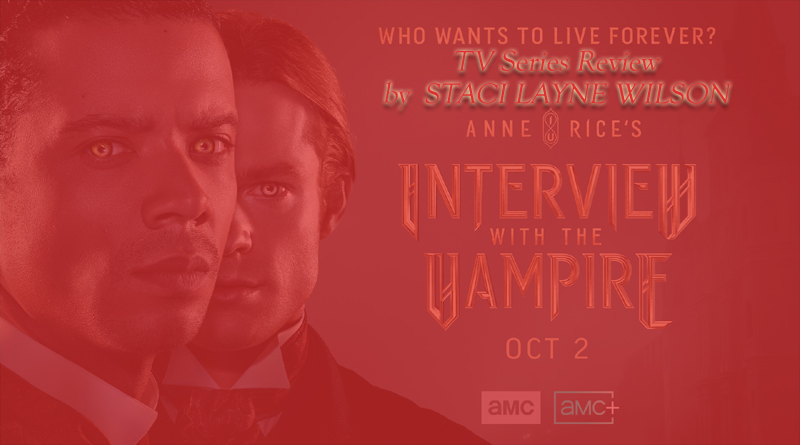 The series kicks into gear with Daniel, who’s nearing the end of his storied career, receiving a mysterious box of cassettes. He pops in the first tape and hears his own decades-younger voice and that of his most unusual interviewee ever, a bona fide vampire. Now Louis wants Daniel to travel to his palace in Dubai, so he can finish telling his tale. It’s an offer that can’t be refused, so the reporter makes the trek around the globe. Through flashbacks, the story of Louis’s 100+ years on earth unfolds. He speaks mostly of the love/hate relationship he had with his maker, Lestat, and how the child vampire, Claudia, disrupted their relationship and set all of them onto an even darker path.

For those of us who’ve been thirsting for a screen adaptation of Anne Rice’s lush and atmospheric 1976 novel that’s on par with the 1994 feature film, the wait is finally over. Shortly before the death of the bestselling and revered author last year, it was announced that her Vampire Chronicles and Mayfair Witches novels were being adapted as series by AMC—and the fans went wild. Then the speculation started. Would the IWTV retelling shy away from the sex and violence that’s so integral to the lush, gothic source material? Who would play such indelible characters as Lestat, Louis, and Claudia? Would it still take place in 18th-century New Orleans?

Purists may find some of the changes a bit annoying. I, for one, had issues with some instances of the artistic license that showrunner Rolin Jones chose to take but I think there are some good—or at least understandable—shakeups. For instance, the racial upgrades and the setting of the origin story in a more-recent time period are solid ideas that modernize the story in a positive and credible way.

Louis de Pointe du Lac is a white slave owner in the book (which made his self-loathing more believable), while in the series, he’s Creole and he runs a brothel and a gambling house in a colorful and dangerous 1910 New Orleans “Storyville” setting. I like the fact that there are more empowered POC characters in the series, which isn’t farfetched given the cultural landscape of the setting and the pre-“Roaring 20s” era. In the feature film, Louis lost his wife and young child (which made the “turning” of young Claudia easier to swallow) but in the book and series, it’s his brother who dies tragically and sends him into Lestat’s eternal embrace.

The subject of Claudia’s age is tricky. In the novel, she was only five, which makes the idea of her being stuck at that physical age while maturing mentally over decades even more horrifying. Neil Jordan’s feature film bumped her up to eleven and actress Kirsten Dunst created a tragic and poignant portrait that still strikes the hearts of many fans. The AMC TV series makes her a teenager which, in my opinion, really waters down the whole point of the character. Bass is a more than competent actor but the role is so far removed from the source material that it’s hard to think of her as Claudia.

On the other hand, I loved the change in Daniel’s journey, placing him both at the beginning and in the twilight of his journalistic and philosophical search for the truth behind the vampire’s existence and purpose. Bogosian has long been one of my favorite character actors—coming into my consciousness via 1988’s Talk Radio—and he absolutely nails it here. Daniel has been through the wringer of addiction and regret, making him cynical and weary by the time Louis summons him but he’s not without his innate curiosity and desire for the truth.

The look and feel of Anne Rice’s Interview with the Vampire are top-notch in every way. The sets are breathtaking in their attention to detail, as are the locations and studio-created street scenes; the costumes are beyond beautiful; and the rich, verdant music score is delightfully reminiscent of the feature film. The overwrought emotional feel fits well with the purple prose of the novel, and the metaphorical “disease” that keeps the vampires “sequestered” during the day is even more relatable thanks to our recent COVID-19 forced quarantine.

Horror fans will be happy to know that between the brooding and bedding, there are some brutal and bloody kills. There’s a scene set in a church that’s a particular marvel in artsy ingenuity as well as dread, suspense, and a ghoulishly gory payoff. The vampires retain their classic characteristics, such as sleeping in coffins, shunning the sun, and sprouting fangs when aroused. In addition to the outright horror, there is an undertone of dark comedy which keeps the more depressing aspects of the tale from weighing it all down.

Having seen the first four episodes of the series, I think it’s safe to say that Anne Rice’s Interview with the Vampire is a triumph that should appease existing fans as well as garner new ones.

Anne Rice’s Interview with the Vampire premieres on AMC and AMC+ October 2, 2022.