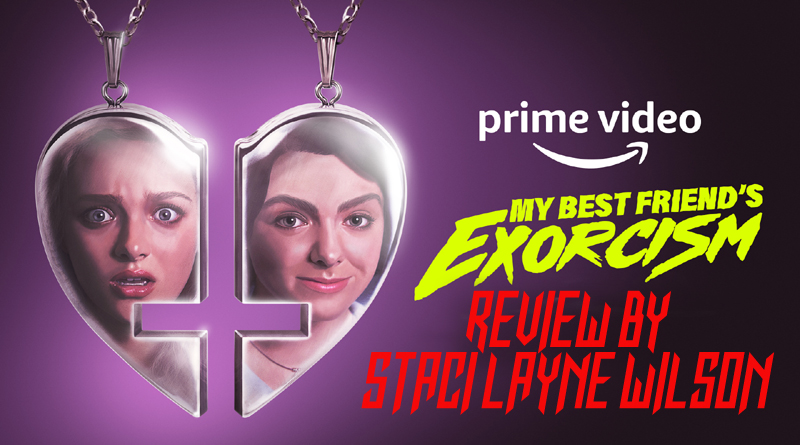 What would you do if your totally rad BFF got possessed by, like, the devil and you try to get help for her but no one believes you? You’d save up your lunch money to hire a mullet-wearing exorcist, then take her to an isolated cabin in the woods to perform the ceremony, amiright?

My Best Friend’s Exorcism is a horror comedy set in 1988 and it’s based on the much-loved, bestselling novel by Grady Hendrix (not his real name… I’m guessing he took “Grady” from The Shining, and “Hendrix” from Jimi, since a lot of his books meld music with supernatural mayhem). The book came out right around the same time as the hit show “Stranger Things” and parallels will almost certainly be drawn between this Prime original film and the Netflix series. Nostalgia drips from the screen like a melting cone of neon pink Haagen Daz thanks to an endless visual parade of hair scrunchies wrapped around home-permed ponytails, Trapper Keepers, and stone-wash everything, accompanied by Tiffany tunes.

While the novel’s period setting made sense in terms of the Reagan-era metaphors employed by the author, screenwriter Jenna Lamia skips the nuance for reasons unknown. The horrific premise is undercut by sarcastic bon mots that never quite gel (unlike, say, Jennifer’s Body, written by Diablo Cody). I would have liked to’ve seen some historical context with the “Satanic Panic” frenzy of the ’80s but it’s hard to envision how it might have fit into this 96-minute flick. Veteran television series director Damon Thomas is no John Hughes in terms of bringing characters to life but he is helped by the cinematography and editing. Christopher Landon, who (IMO) did an awesome job directing Happy Death Day and Freaky, acts as a producer here but My Best Friend’s Exorcism is not up to par with those movies.

Despite the broad script strokes they were dealt, the two leads—Elsie Fisher as Abby, and Amiah Miller as Gretchen—sparkle like a Bedazzler (“As seen on TV!”) when they go from awkward teens playing with a Ouija board to badass bitches taking on evil itself. Before the big Satanic showdown, we get a stand-issue (but fun) transformation story of Gretchen going from best friend to mean girl. The fate of Abby and Gretchen will be determined by one question: Is their friendship powerful enough to beat the devil? The inexperienced but gung-ho exorcist is Christian Lemon (Christopher Lowell), a gospel-gushing bodybuilder who Abby saw performing at the school gym during an assembly—he seems to know his stuff, so she hires him to help her cast out the unclean spirit. Christian seems to be stepping up but before long, a rattled evangelist abandons the pair—“This is not your average puke and rebuke,” he quips as he heads for the door and peels out in his beater, leaving a cloud of dust and holy water. Now, it’s all up to Abby to save Gretchen’s soul.

There isn’t much gore but the body horror involving a monstrous tapeworm is sure to get some gag reflexes going. (And for those old enough to remember a certain urban myth, it’s double the fun.) The scenario in which Gretchen’s soul is stolen by an unseen demonic minion is well-done and it follows the book’s blueprint almost to the letter. The Bible-battering conclusion is fast-paced and employs all the shock tactics we’ve come to expect (and love).

Overall, My Best Friend’s Exorcism is fun and enjoyable but it’s not likely to become a classic (cult, or otherwise). It’s more of a gateway horror film for younger audiences, so it gets a mild “Hail Satan!” from me.