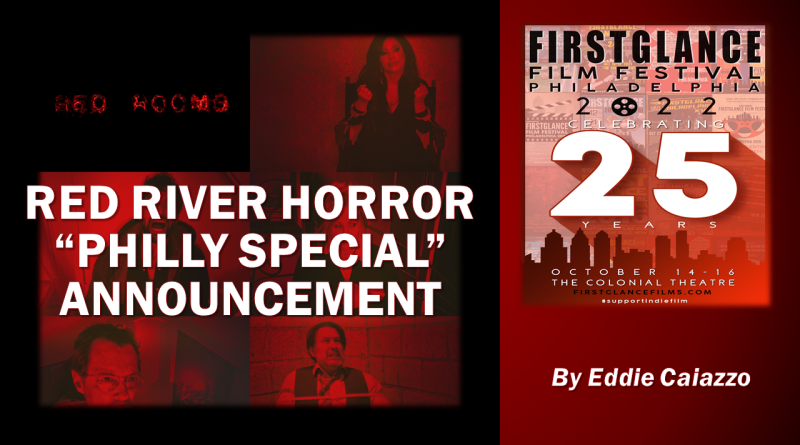 Philly Chick Pictures? FirstGlance Philadelphia Film Festival? The color RED!? Add our friend (on loan to LA by way of Philly) Brooke Lewis Bellas to the mix and you have yourself a premiere the Red River Horror team is ecstatic to announce. The third episode titled “Be Honest” of the much-anticipated limited web series Red Rooms will debut on opening night of the FirstGlance Philadelphia Film Festival. Not only is FirstGlance celebrating its 25th anniversary, but it also will call an exciting new venue home for 2022 — The Colonial Theatre in Phoenixville (Remember The Blob? That’s the theater!).

Red Rooms will have its Red Carpet screening event on FirstGlance’s opening night; Friday, October 14, 2022 at 7:45 p.m. EST. The premiere will kickoff the whole block of programming for night one lasting until 10:30 p.m. See the full schedule of programming and times at www.FirstGlanceFilms.com/Schedule.

Synopsis: In the darkest corners of the darknet, there are terrifying places where the abducted are held captive, psychologically tortured and live-streamed. Victims are given the chance to escape if they agree to confess their worst sins to the world, preserving them online for eternity. Paid subscribers watch, listen and vote on who has committed the evilest crimes against humanity. The winner lives. The losers die. These are the infamous “Red Rooms” and this terrifying new web series invites you to take part in this diabolical dark web reality show, where nothing is what it streams to be.

“Red Rooms was conceived and completed out of isolation desperation,” exclaims Brooke Lewis Bellas. “When COVID-19 hit Hollywood and we were all in isolation, I called for a virtual production meeting and suggested we attempt to experiment by filming each character virtually from their homes, and our incredibly talented actors David, Susan, Ricky, and Noah jumped into this virtual creative experience with us and gave more than we could have ever asked for!”

“As a filmmaker, I have always wanted to work with the multi-talented Brooke Lewis Bellas,” explains Joshua Butler. “She is a legendary ‘Scream Queen’ for sure, but she is so much more. Brooke is a talented actress, as well as a most savvy producer. Red Rooms was also a chance to make a kick-ass, terrifying, relevant piece of cinema within the new production-era rules that COVID-19 has written for us.”

Click the FirstGlance Poster below to get tickets to see episode one of Red Rooms, which won’t be available again until the end of 2022 on digital platforms.

A Personal Note About FirstGlance

Red River Horror podcast host Joe Zakrzewski and I are excited to be attending the FirstGlance Film Festival Philly in support of Red Rooms and the other great programming in store for Opening Night. Red River Horror was born and raised in Philly, and this marks our return to the FirstGlance Red Carpet since one of our early projects screened before a block of films in FirstGlance Philly 2015. What’s extra-special about this specific Fest is that our Rocky VII: Adrian Lives trailer was selected as one of only 10 trailers to screen before the block of films back then. The judges that made this selection were Sharon Pinkenson, executive director of the Greater Philadelphia Film Office, and one of our favorite horror stars of all-time — Tony Todd! Joe and I are pumped to see the FirstGlance family and friends on October 14th! — Eddie C.