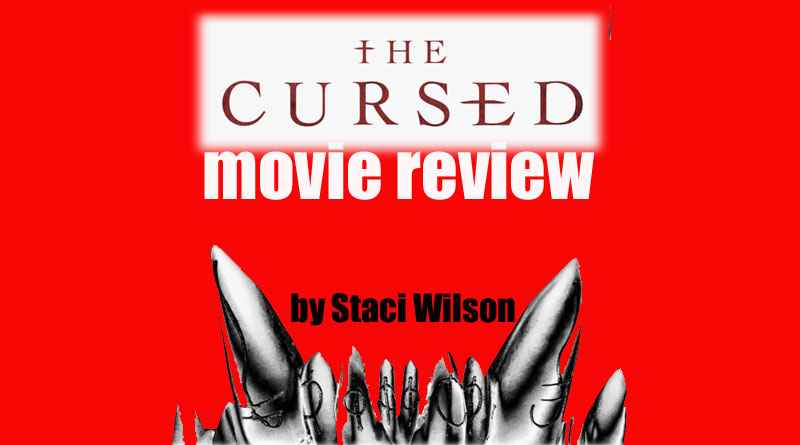 In rural 19th-century France, a mysterious supernatural presence threatens the British-accented inhabitants of a small village. John McBride (Boyd Holbrook), a handsome young pathologist and widower, is summoned to town to investigate the danger – and he purges some of his own demons in the process.

That’s the crux of the story but in the beginning, we see why this evil is so hellbent on these particular townspeople. It’s all to do with the Laurent family – land baron Seamus (Alistair Petrie), his somber wife Isabelle (Kelly Reilly), and their tween children Charlotte and Edward (Amelia Crouch and Max Mackintosh). Seamus has disregarded a legitimate parcel claim and chosen to slaughter an entire Romani community in order to steal their property. The way in which this sequence is shot – in an unflinching birds-eye fashion – is particularly effective and sets up the notion that we are in for a film that is curated by an auteur. (And we are: The Cursed is written, directed, and shot by Sean Harris.)

As the murderers pick through the people’s possessions and deal brutally with a few survivors, Seamus finds a strange artifact: a set of fanged teeth dipped in silver and etched with strange symbols. He tosses the teeth into a hole in the ground, along with the dying victims, and goes home. But, of course, he’s soon pursued and punished for his sins.

The Cursed feels very much like an updated, and way gorier, Hammer film. It’s arch, gothic, suspenseful, and extremely atmospheric. It also reminded me of the underrated werewolf extravaganza from 2001, Brotherhood of the Wolf (minus the interpersonal relationships and martial arts). Still, The Cursed is its own thing – Harris clearly put a lot of thought and effort into making it and the result is near perfection. It meanders in its midsection but the death scenes and overall eeriness will keep you watching. The unsettling score and sound design are perfectly placed, adding to the sense of dread.

While many of the victims are innocent –family and domestic employees of the land-snatching killers – The Cursed is still something of a commentary on Colonialism, morality, and the power of karma. How these hapless souls are stalked and killed plays up the dark, foggy, damp atmosphere to perfection and are all but guaranteed to send those proverbial shivers up your spine. In one particularly bone-crunching scene, the citizens decide to hole up in their local church… but there’s no escaping their fate.

Horror film fans who love folklore will get something extra from The Cursed but even if you’re not into that genre, you’re bound to get caught up in the mystery – what is this invisible evil… a phantom? A vampire? Werewolf? Something unknown? There are top-notch practical effects that reveal the monster in old-school fashion (bolstered by a bit of restrained CGI), not to mention bloody outcomes for those who disturbed the hallowed Romani ground.

The Cursed is one of the most absorbing fright fests I’ve seen in some time; I encourage you to watch it on the biggest screen you can.