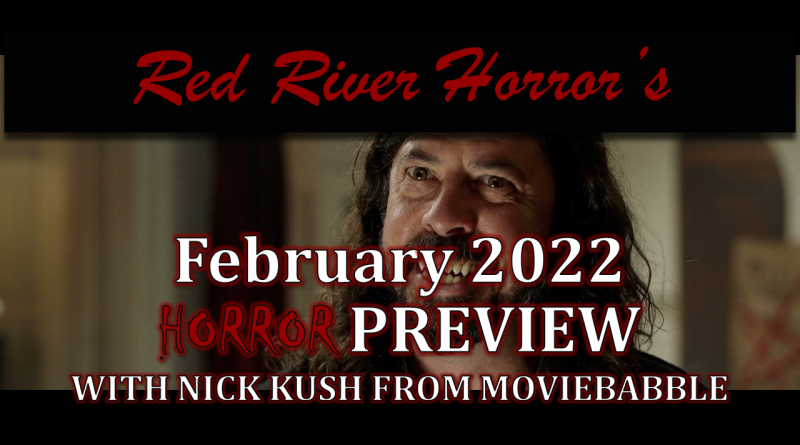 After a January where multiple weekends went by without a new wide release, February seems to be bringing the movies back to form. After all, the peak of cinema, Jackass Forever, comes to theaters the first weekend of the month. With it comes a plethora of notable horror and thriller movies. Some of them might be terrible, but hey, that’s better than nothing!

Let’s take a look at what the month ahead has in store for us in the February 2022 horror preview:

It’s time we stop taking Steven Soderbergh for granted. Many have shrugged at this recent experimental stage in his career after coming out of semi-retirement. And yet, when many of his generational peers are bemoaning the state of the industry and the theatrical experience, he’s rolling with the constraints of the current market place and churning out consistent bangers on the cheap for streaming services. He’s always worked at an insanely fast pace, but he’s really kicking it into overdrive now.

His latest soon-to-be banger is Kimi. Zoë Kravitz stars as an agoraphobic streamer who thinks she may have uncovered evidence to a violent crime. When she seeks out help, she’s immediately labeled as psychotic.

Look, I get it. A movie about a “agoraphobic streamer” sounds incredibly hokey on its face. I’m simply putting my faith in Soderbergh, who rarely does me wrong.

Kimi will be available on HBO Max on February 10th.

Aside from a few notable exceptions, werewolves don’t have the same cultural cachet as demons, zombies, and other horror movie monsters. The Cursed (previously titled Eight for Silver, a much better title in my mind) hopes to rectify that.

Boyd Holbrook stars as John McBride, a pathologist who arrives at a remote village to investigate rumors of supernatural forces in the land. Of course, what’s actually happening is far worse than he could have ever imagined.

The Cursed will be available in theaters on February 18th.

After many bad sequels and different rights owners, the ninth film in the Texas Chainsaw Massacre franchise — simply titled, Texas Chainsaw Massacre — is pulling a Halloween (2018), forgoing all franchise continuity and creating a direct sequel to the original. Going one step further, Olwen Fouéré is stepping into the role of Sally initially played by Marilyn Burns in the 1974 film and taking on a Laurie Strode-esque role as an older woman who has waited years for her chance to finally stop evil once and for all. Let’s just hope characters don’t say “evil dies tonight!” 182 times.

Part of me wonders if the retcon-everything-except-the-movie-everyone-likes sequel is the last gasp in franchise building. In the case of the TCM franchise, it’s already had sequels to the original, multiple reboots, and multiple prequels. This is even the second time the franchise has tried to retcon previous installments and make a direct sequel Tobe Hooper’s classic. Where does it go after this? Retcon everything and make a direct sequel for a third time???

Maybe I’m getting ahead of myself here, but after so many bland, uninspired TCM movies, it’s difficult for me to get excited about another one. I’m not getting my hopes up.

Texas Chainsaw Massacre will be available on Netflix on February 18th.

Do we have this generation’s Kiss Meets the Phantom of the Park on our hands? The Foo Fighters are making their very own horror-comedy in Studio 666, in which the members of the band head to a mansion in Encino, L.A. to record their 10th album. The catch is that it’s actually a portal for demons to enter our world. (What are the odds?) Dave Grohl then grows fangs and begins to terrorize his band members.

Will this probably be terrible? Chances are high. But will it be a very weird footnote in the career of one the most popular modern rock bands? Chances are equally high.

Studio 666 will be available in theaters on February 25th.

Ghosts of the Ozarks – February 3rd (Theaters and VOD)

All the Moons – February 10th (Shudder)

Those Who Walk Away – February 11th (Theaters and VOD)

Catch the Fair One – February 11th (Theaters and VOD)

They Live in the Grey – February 17th (Shudder)