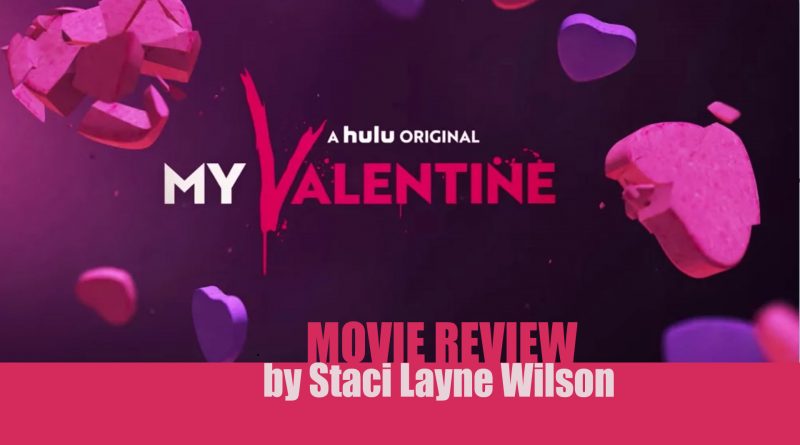 When Hulu’s original movie series “Into the Dark” premiered with its Halloween episode in 2018, I was impressed. Now, over a year later, I remain most impressed by that one entry. Don’t get me wrong, there have been some other standouts along the way but to say the anthology is a mixed bag is an understatement. The biggest disappointment being how very, very loosely some of the films can be connected with their associated holiday.

Such is the case with My Valentine, which has more to do with the lead character’s name than it does the flowers-and-hearts holiday. If you want something that’s reminiscent of My Bloody Valentine (1981) or Valentine (2001)… well, you’ll just have to watch those movies over again. My Valentine doesn’t have a single Cupid’s arrow, poisoned chocolate kiss, or gore-soaked heart. There is blood, but it’s more like a box to check in this suspenseless thriller which pits characters locked together in a small concert venue (but alas, this is no Green Room).

So, what does My Valentine have going for it on its own terms? It’s a candy-colored, visually dazzling flick clearly made with tween audience in mind, right down to the cartoony bubblegum pop and cardboard cutout girls who are seemingly interchangeable. In fact, that’s the premise of this sneering satire: predatory manager Royal (Benedict Samuel) dumps his gal-pal/protégé Valentine (Britt Baron), only to steal her songs and remake her in the image of his new lookalike squeeze, Trezzure (Anna Lore). Clearly, the parable draws from the real-life strife between Poppy, Mars Argo, and producer Titanic Sinclair. While the cynical eye on how some men treat women in the music biz is 20/20, the focus is a little off; I couldn’t quite tell if writer/director Maggie Levin was trying to make a full-on comedy or not.

The visuals are… interesting. Usually, I’m all about the split-screen (Brian De Palma fans, unite!) but they’re not only overused willy-nilly in My Valentine, they are further burdened with what looks like the overeager love child of Snapchat and the sparkle filter on Instagram. Having said that, the cinematography by Ana M. Amortegui is lovely—she’s got an eye for composition and knows how to work a color palette. Since this is indeed a story of pop stardom and how some people are willing to kill for it, the music and lyrics are apropos and believable. These songs could indeed be YouTube hits, especially the signature tune, “The Knife” by Dresage. The sets are also well-done, bringing to life the small, trendy club which serves as the backdrop to much murder and mayhem.

As I mentioned, there’s grue and gore but no suspense or any sense of dread. Not that it doesn’t have its moments and good points, but for those reasons, My Valentine really doesn’t actually qualify as a horror movie in my book.