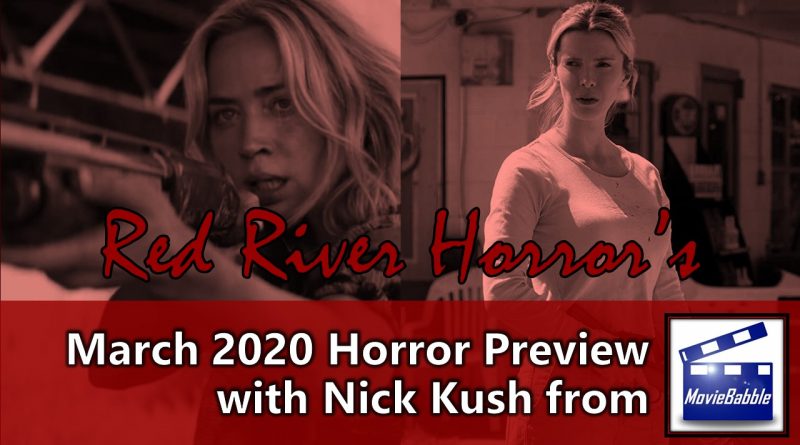 With the start of spring in March comes a beefed-up film slate. We’ve seen a summer sprawl of sorts in the last decade or so, where studios are starting to forget the typical May to the first week of August timeline for dropping their best commercial material and are releasing some of them in the first few months of the year. That’s great news for us! Because we don’t have to wait any longer for what is probably one of the marquee horror films of the year…as well as some other noteworthy films.

Here’s a look at what to expect this month in horror:

Any time a poll quote says that a film evokes the work of David Fincher, I’m very, very intrigued. Even better is when a flashy poll quote like this one is pretty accurate. Swallow is a heart-wrenchingly twisted thriller from relative newcomer Carlo Mirabella-Davis, following a newly pregnant wife played by Haley Bennett who has a growing desire to swallow inedible, possibly dangerous objects. Yes, I squirmed throughout this film, and the deep psychological study of Haley Bennett’s character only increases the feeling of unease.

Haley Bennett is one of those actresses that I’ve liked for some time. She has popped up recently in supporting roles in many notable movies over the last few years. But through no fault of her own, none of those movies — such as The Equalizer, Hardcore Henry, The Magnificent Seven, or The Girl on the Train — totally hit the mark, nor were they entirely great showcases for her talents. I have been waiting for her to find a leading role that may make people take notice. Thankfully, she may have found that role here. She delivers a standout performance as an initially passive housewife — watching her progress the character is nothing short of astonishing.

Swallow is both in limited theaters and available to rent on March 6th, so you can be flexible with your viewing arrangements.

We hear so much about movies that are cut to pieces after studio interference and negative reception online that it warms my ever-hardening, cynical heart to see Universal Pictures stand behind The Hunt and lean into the controversy surrounding it after it was pulled from its original September 27th, 2019 release date. They even updated the tagline to say “the most talked about movie of the year is one that no one’s actually seen.”

You probably know the story by now: following the tragic shootings in both Dayton and El Paso, followed by tweets from President Trump himself, Universal shelved the project, and it was unclear when we would actually see the film, if at all.

Ironically, a lot of premature rhetoric surrounding The Hunt seems to validate a lot of the movie’s ideas. The film pulls from the classic short story “The Most Dangerous Game”, with a group of strangers being hunted by elites. However, the game seems to have been created by the anxieties and misunderstandings of both Democrats and Republicans, devolving into madness as the two sides struggle to explain themselves. That sounds like great political satire if you ask me!

A Quiet Place was a massive success in 2018. Not only did momentarily save Paramount from further financial ruin and receive critical acclaim, but it also re-taught audiences how to finally stop talking and watch a movie like civilized human beings.

Frankly, I’m not over the moon for the first A Quiet Place like many people: it’s one of those movies that is solidly crafted in the moment, but the slightly nitpicky holes become more apparent the further you get away from it. But I’m still very interested in A Quiet Place: Part II, however, being the beginning of a possible franchise that it is. The first film was very contained, although it unquestionably had hints of a massive scope waiting to be unpacked. John Krasinski took over the writing duties for this project as well, so it’ll be yet another test for him as he looks to grow his career.

Plus, adding Cillian Murphy to your cast is never a bad idea.