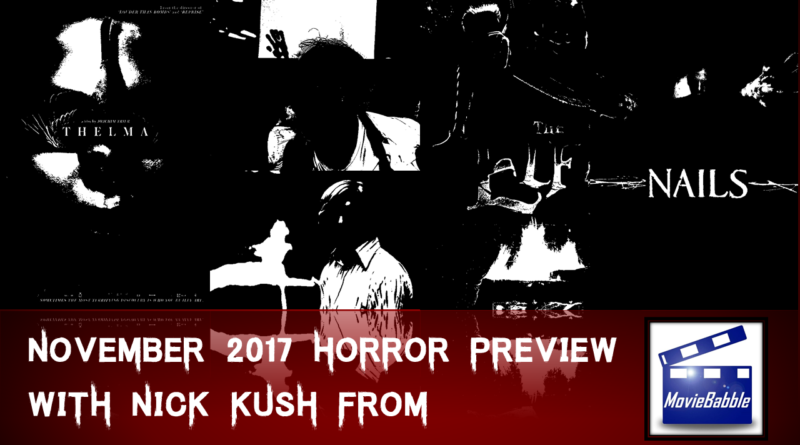 Although October is known as the premiere month for horror in film, there’s always a crop of horror films earning some type of release, no matter the time of year.  As 2017 comes closer to its end, let’s take a look at the November 2017 horror preview to see which films may become fan favorites:

My Friend Dahmer is scheduled for a limited release during the first weekend of the month.  Depicting the early life of killer Jeffrey Dahmer, the film is already garnering buzz by many esteemed pundits.  Many claim that Ross Lynch may become a star after people see his performance as the vengeful murderer.  It’s easily the “can’t miss” film in this preview.

There are a few smaller movies to see at the beginning of the month, most notably The Elf.  The film is a Christmas-themed horror flick that tells the story of an elf doll that was created to cause a horrible massacre over the holiday season.  But, if that doesn’t float your boat, look for Cute Little Buggers (an alien-themed movie) or Mother Krampus (a town investigates the disappearances of young girls).  All three of these films are available on VOD or DVD.

The movie to watch for this week is definitely Thelma from Norwegian filmmaker Joachim Trier.  Currently holding an 88% on Rotten Tomatoes, Thelma tells the story of a girl that begins to develop dangerous, supernatural abilities.  It appears that this film is the “critic’s choice” for November.

Another foreign film, I Remember You, will also release on VOD this week.  A group of townspeople are connected by some horrific murders, leading to a frightening, mysterious climax.

And, yet another foreign film is also dropping November 10th.  Mayhem offers shades of The Belko Experiment with an office-based horror film where a virus causes employees to go insane.  As you might have guessed, a small group of employees fight for their survival amidst the chaos.

The Punisher himself, Jon Bernthal, and Christopher Abbott star in Sweet Virginia as two men that form a dangerous friendship in the wake of a wave of violence in their remote Alaskan outpost.  If that style of film doesn’t excite you, check out Angelica.  It tells the story of a woman attempting to protect her newborn as paranormal occurrences become more prevalent around her Victorian home.

Still not intrigued?  Seek out Nails.  The film follows a hospital-ridden track coach that believes her room to be haunted.  Her worst fears become even more apparent as this force becomes more clear.  However, she feels helpless as she can’t move from her bed.

*Polaroid is one of the few wide releases in the November 2017 horror preview.  After a teenager finds a vintage camera, she soon realizes that it may be cursed.  After taking a picture of another person with the camera, they soon meet their demise.  The teen and her friends must quickly solve the mystery of the figure behind the killings before it’s too late.

*Editor’s Note: According to Anthony D’Alessandro for Deadline Hollywood, The Weinstein Company/Dimension Films has pushed Polaroid’s release to an unspecified date in 2018.

Did you miss any of the October horror movie action?  Catch up with Nick Kush from MovieBabble’s October Horror Preview for Red River Horror.