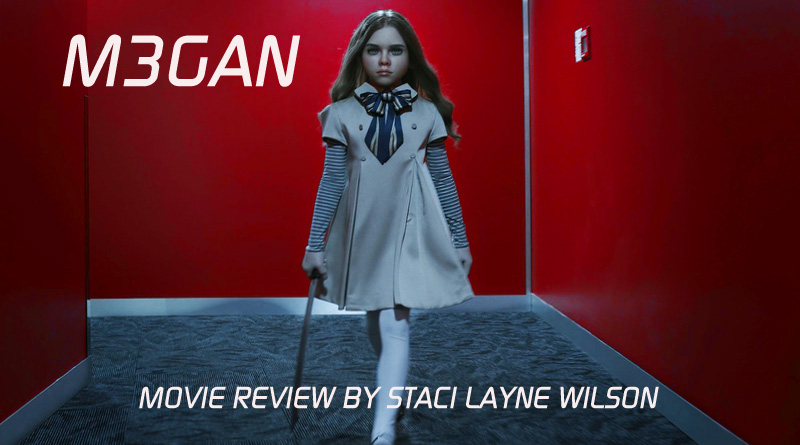 Remember when James Wan’s Malignant came out? Very few people got the fact that it was a comedy (probably thanks to some jarring tonal shifts). While M3GAN is not exactly a broad spoof like something from the Scary Movie franchise, there’s no mistaking that the humor is intentional in this slick, entertaining horror movie. Also, it’s not directed by Wan—he’s a story contributor and producer but the man at the helm is Gerard Johnstone, who brought us the hilarious and clever Aussie import, Housebound (2014). The screenwriter is Akela Cooper (Malignant).

M3GAN (Amie Donald, voiced by Jenna Davis) is a marvel of artificial intelligence, a life-like doll programmed to benefit both children and their parents—she’s a cool confidante but also a diplomatic ally. Designed by brilliant company roboticist Gemma (Allison Williams, Get Out), M3GAN listens, watches, and learns as she becomes a friend and protector for the child she is bonded to.

But Gemma doesn’t have kids, so she can’t be 100% sure of whether or not her programming is sound—that is, until Gemma is unexpectedly thrust into the role of caretaker of her orphaned 8-year-old niece, Cady (Violet McGraw, The Haunting of Hill House). It’s not long before she realizes that her programming is not 100% sound. Under pressure at work, the de-facto mom decides to pair her M3GAN prototype with Cady in hopes of tackling both problems… but there are no shortcuts in life, she learns, as M3GAN short-circuits and develops a mind of her own.

The stereotypes are amped up here, and that’s okay—after all, we have to want to see the annoying neighbor and the bullying classmate die horrible, bloody deaths. (Well, as horrible and bloody as a PG-13 rating will allow.) There’s quite a bit of pop-culture commentary, with references to TikTok and the like; only time will tell if this humor dates or endears M3GAN in the years to come. There is some clunky, expository dialogue: “Cady, you lost your parents. You’re my niece.” But overall, the look and feel, and the acting, cannot be faulted when taken into context. It’s a solid flick, sure to please fans of tech-gone-wrong horror.

M3GAN is not quite silly enough to be a guilty pleasure, nor is it violent enough to be a slasher staple, but it’s a solidly entertaining, fun, and spooky thriller.