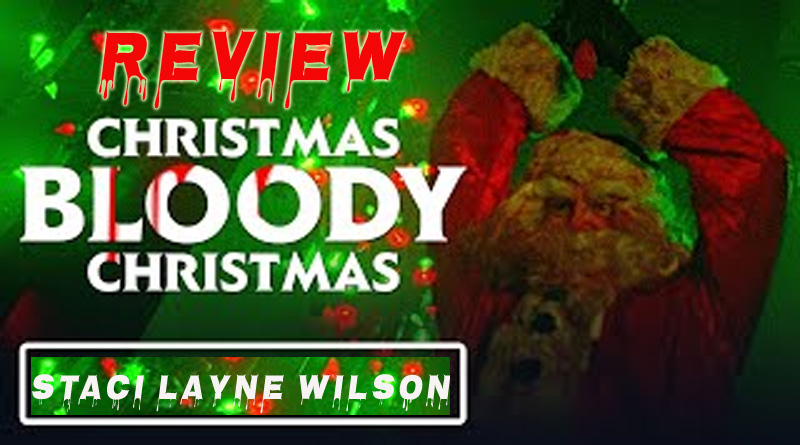 There are quite a few holiday horror movies—from Bob Clark’s 1974 classic Black Christmas to the 2010 Finnish import Rare Exports: A Christmas Tale, and there’s even a gory thriller, Violent Night, hitting theaters this season along with this small indie we’re reviewing here, Christmas Bloody Christmas.

As one of the characters says, “Christmas fucking sucks”—and it really does in this modest but effective fright flick written and directed by Joe Begos. Begos garnered attention with his 2013 film Almost Human (VF) and has been churning out a new genre movie every two or three years since. He fares better as a director than as a writer (the dialogue is clichéd and littered with more f-bombs than Rob Zombie’s circular file) and when it comes to action and gore, Christmas Bloody Christmas does not disappoint.

The killer party kicks off on a snowy December night, with snarky record store owner Tori (Riley Dandy) and her sex-fiend employee Robbie (Sam Delich) having arguments about horror sequels and metal albums… but they’re also flirting in a schoolyard sort of way. Tori and Robbie close the shop and head over to another store where friends work, scoop them up, and head to a nearby bar where they proceed to get completely hammered. Meanwhile, an ax-wielding, malfunctioning RoboSanta+ (Abraham Benrubi) floor display model is stalking their every move.

Slasher St. Nick has recently been recalled due to a bad chip but this particular model isn’t going down without a fight—think: the Terminator in a red and white suit. He fits right in with the 1980s straight-to-video vibe thanks to Begos’s attention to detail in terms of the neon color palette, synth score (by Steven Moore), and practical effects (by Josh & Sierra Russell of Russell FX, who also worked on 2022’s Hellraiser). What’s more, Christmas Bloody Christmas was shot in grainy 16mm (by Brian Sowell).

There’s not much of a plot here; basically, it’s a body-count horror that takes place on one gory night. Those sacked by Santa include clueless cops, kids having sex, next-door neighbors… you name them, and Santa will cross them off his naughty list. Actually, RoboSanta+ doesn’t discriminate—he’ll put anyone on the chopping block. The kills are gruesome and over-the-top but there’s no suspense and little actual horror. Christmas Bloody Christmas tells you exactly what it is in the title.

To be honest, this 90-minute gore-fest isn’t that much fun to sit and watch by yourself (which is the fate of most film critics, especially at year’s end when we’re buried under an avalanche of “For Your Consideration” awards screeners). But—if you’re having a few friends over for libations and a night parked in front of the tube, you can’t go wrong with Christmas Bloody Christmas.