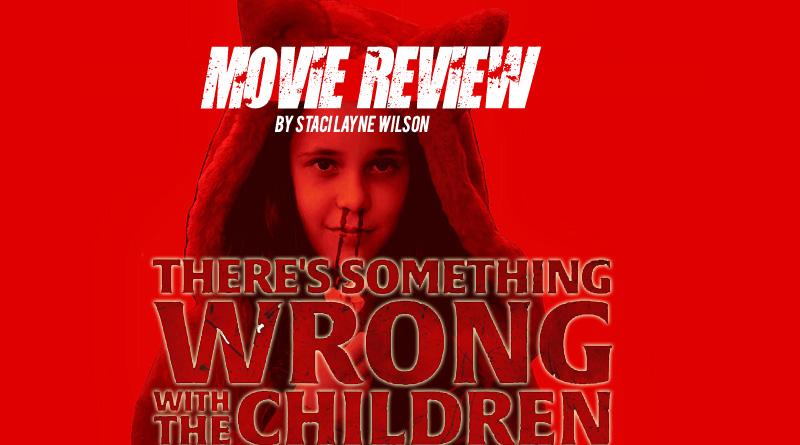 When Margaret (Alisha Wainwright) and Ben (Zach Gilford) take a weekend trip to a cabin in the woods with longtime friends Ellie (Amanda Crew) and Thomas (Amanda Santos) and their two young children Lucy (Briella Guiza) and Spencer (David Mattle), things don’t go as planned. Ben begins to suspect something supernatural is occurring when the kids behave strangely after disappearing into an abandoned mine and emerge… different. Of course, no one believes Ben until it is too late to change their fate.

As directed by Roxanne Benjamin and written by J. Cimfel and David White, There’s Something Wrong With the Children follows a tired formula but is fortunately saved from complete clichédom thanks to some suspenseful moments and ace acting. Zach Gilford, who was excellent in Netflix’s “Midnight Mass,” saves the show with his textured and believable-enough performance.

The setting—a lone cabin, with a creepy cavern nearby—also helps the story along. While there is nothing wrong with a tried-and-true approach, the characters are written in such a thin way that you may find yourself rooting for the evil entities inhabiting the children over their intended victims. The horror takes a while to kick in, so for the better part of the runtime, we listen in on domestic chit-chat, sex-talk, and couples bickering.

There’s Something Wrong With the Children focuses on the adults’ neuroses and their feelings on parenting—Ellie and Thomas secretly miss their childless freedom, while Margaret and Ben agonize over whether to have children of their own—while giving short-shrift to the reason we want to watch an “evil children” movie in the first place.

The kids seem overly creepy and weird after being possessed, which undercuts the sense of urgency when nobody believes Ben. There was a moment in this film where a cool twist could have been delivered but wasn’t. Having said that, it’s a slick, well-made movie that looks good (but doesn’t sound so good; I strongly disliked the music score but it is different, so it’ll be divisive) and isn’t overly long—worth a look for sure, if you’re into possession thrillers.

The final act of There’s Something Wrong With the Children kicks things into high gear, pitting one adult against the children, forcing them to use their wits and ruthlessness to survive. There are some high-adrenaline stalk-and-chase scenes that make for a good payoff and reward for sticking around ’til the end credits roll.