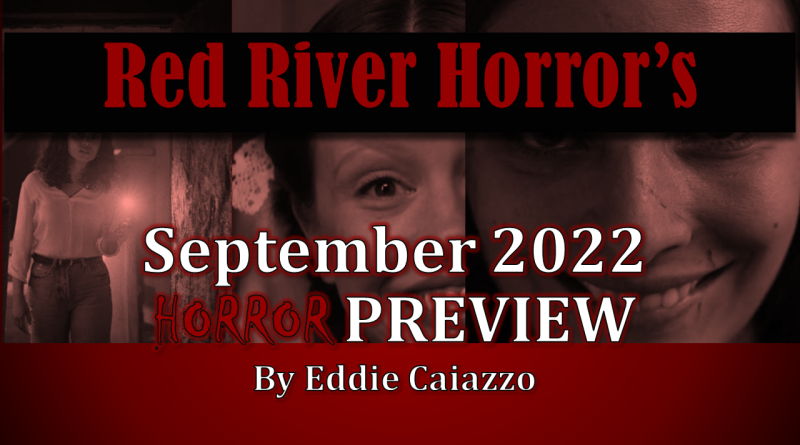 September here in the Mid Atlantic is a time when your wardrobe selection is quite hard to drill down. When you leave for school or work in the morning, the weather is quite cool. By lunchtime, it feels like the dog days of summer. At night, you’re tricked into being cool again. It’s quite something. Be as it may, September marks the beginning of fall, and Red River Horror wants to make sure you have all of the movies you need to start the season off right. Welcome to the September 2022 Horror Preview.

Barbarian – Ever since Bill Skarsgård masterfully donned the grease paint and jumpsuit as Pennywise the clown in 2017’s IT, you can’t help but view him on-screen as a creepy dude. When Tess (Georgina Campbell) arrives in Detroit at an Airbnb late in the evening, she finds Keith (Skarsgård) at the property already. Oddly, the house has been double-booked. The whole situation seems strange, but Tess decides to stay the night — Keith seems friendly enough. Then, strange noises start occuring during the night. Tess wakes up and goes into the basement. You NEVER go into the basement, but…this is a horror film after all. What’s great about Barbarian’s trailer is it does not give much away, only a jump scare that still doesn’t tell us how this one is going to shake out. Barbarian looks good enough to see in theaters, which is where it will be exclusively beginning September 9.

Pearl – Did you know Ti West and Mia Goth were making a prequel to X? I sure as hell didn’t. Pearl was shot in-secret, and on September 16, 2022, it’s back to Howard and Pearl’s farm down in Texas where that crazy group of kids filmed their porno flick. This is Pearl’s origin story and she’s played by Mia Goth, the same actress that gave her life in the first film in addition to playing the young Maxine. If you like weird, gritty, bloody and sexual, then this double feature from Ti West and released by A24 might just be for you. Catch Pearl in theaters September 16.

Smile – At the time of this writing, Smile‘s official trailer has notched more than 18-million views on YouTube, despite it resembling a trailer from a Blumhouse PG-13 movie from 10 years ago. I do have personal experience of someone utterly terrifying me just by smiling…so using the facial expression does work as a creep factor in itself. Paramount is releasing Smile in theaters, so the chances of this one streaming on Paramount+ before Halloween really depend on how well it does at the box office. The trailer shows us Dr. Rose Cotter (Sosie Bacon) coming into contact with people that act strangely by smiling, then committ a violent act. After Cotter’s first experience with a patient who appears to have committed suicide after the big smile, there’s a Ring-like countdown (“seven days…”) that ensues until our main character either shows the smile and dies, or doesn’t smile and survives. I’d try and catch this one during horror’s favorite season.

There are so many online resources available to find that latest horror film to add to your collection or your watchlist on your favorite streaming platform. It has been a total blast putting my thoughts down on these digital Channels of Fear here on the site in the latest two Horror Previews, but you physical media fans might be looking for a bit more, and I totally get it. So, I did a little digging and found out there was a sequel to Alfred Hitchcock’s The Birds from 1992, a forthcoming 4K Ultra HD release of The Lost Boys and a 25th Anniversary release of I Know What You Did Last Summer. This random smattering of films will be released this month on Blu-ray along with many other fine horror picks for you fans that still attest that owning a physical copy is the true way to horror. Where did I obtain this information, you ask? The website is www.Blu-ray.com, and boy is it loaded with info about all genres of cinema. Click this link to see the list of September releases on Blu-ray and 4K Ultra HD Blu-ray.