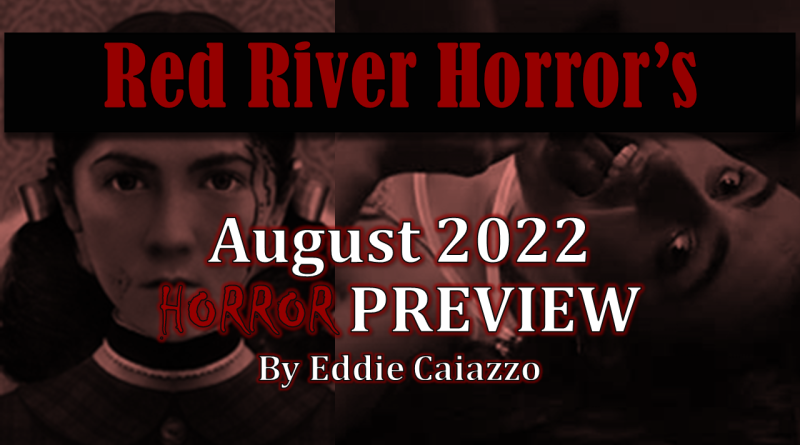 It’s (almost) that time of year! The weather feels in no way Autumnal this month, but…Red River Horror deems August the unofficial beginning of “Spooky Season.” Why? You could point to the department stores putting out their best plastic skeletons and pumpkin decorations. Or the Oktoberfest and pumpkin beers that make their way back on store shelves throughout the month. August also used to be when Hollywood studios would release their blockbuster horror film that year to the big screen. Things have changed a bit in recent years as film producers have seen the benefit of releasing their horror films in October.

But, as you read on, there are plenty of new horror flicks to enjoy that should fill out the hottest month of the year nicely and get you in the mood for horror so let’s take a look at this month’s offerings, shall we?

Prey (Hulu) – The Predator series is in need of some serious help by way of a good film entry. It’s long overdue. Since the John McTiernan-directed 1987 classic starring Arnold Schwarzenegger, the rest of the films in this scattered series haven’t satisfied audiences when it comes to putting the ugly, green-blooded, master hunter alien back in the path of those pesky humans. The Rotten Tomatoes scores for each film trends like a cell phone signal bar display. This month, 20th Century Studios does seem to strike the right chord with their latest release Prey. Set in the Comanche Nation 300 years ago, a young female hunter Naru (Amber Midthunder) looks to save her tribe from the Predator – a master hunter wielding advanced technology that is not of this earth. Naru will either escape with her and her tribe’s lives and defeat the beast or be defeated. To find out, you’ll have to stream this one on Hulu.

They/Them (Peacock) – I can’t help but make the “Six Degrees of Kevin Bacon” joke as one half of The Bacon Brothers heads back to his horror roots as a camp counselor in They/Them. This time, though, the Baconator is the head counselor at Whistler Camp, not Camp Crystal Lake. The synopsis of this Blumhouse slasher simply reads “LGBTQIA+ empowerment tale set at a gay conversion camp.” While Netflix battles within over their comedy content and LGBTQIA+ fans, the Peacock (NBC/Universal/Comcast) streaming service dives head-first into the horror genre. Peacock’s horror exclusives have been 50/50 up to this point scoring a big one with Halloween Kills, and a lukewarm remake of Firestarter (read the RRH review here) that wasn’t well received. Stream They/Them exclusively on Peacock.

BEAST – Here’s something a little bit different for the big screen as of late; a man and his two daughters end up as the prey of the King of the Jungle — a huge aggressive lion that’s ready to pounce on the man, his family, and any other human being in its tracks. In the trailer, we’re treated to a glimpse of just how large the beast is and some of the terrifying environments the family finds themselves trapped in, as the big-toothed cat seems to be everywhere all the time. Films like BEAST are what the movie theater experience is all about, so if you plan on seeing this one, enjoy it on a big screen, with big sound and a big bucket of popcorn.

Glorious – Shudder typically offers some, ahem, glorious original programming. In August, Glorious makes its way to the horror streaming service. A dude getting over a bad breakup has himself a party of one at a rest stop that appears pretty unassuming from the exterior. As soon as he has to break the seal, things get weird on the inside of the rest stop. J.K. Simmons plays the voice of God (or just the voice in the next stall over), there’s a glory hole with a bizarre painting surrounding it and lots of bright purple colors that fill the screen. Oh, there’s also a big ass teddy bear inside the rest stop as well. On Shudder, this could go either way — Glorious could lean more scary than funny or vice versa, or the perfect mix of both.

Orphan: First Kill – The polarizing Orphan from 2009 receives…a prequel? Yup. In a year where Batman and Spiderman are sitting on the sidelines, Paramount says it’s time for an Esther origin story. I remember viewing Orphan for the very first time and was impressed and unnerved by the twist ending. Young Isabelle Fuhrman creeped me the hell out in ’09, and it looks like she’ll do it again as she reprises her role for this latest installment that caught many in the horror community by surprise. Is Orphan: First Kill worth seeing in theaters? Maybe. Or, maybe just watch this one on Paramount+ if you have it — it’ll be streaming there on release day.

The Invitation – The legend goes that in order for a vampire to enter an owned home, they must be invited in by the owner. In The Invitation, it seems we have a bit of a role reversal as Evie (Nathalie Emmanuel) receives an invitation to a wedding in the U.K. from a cousin she never knew she had. She pulls up to a beautiful mansion in the countryside and meets a dashing British gentleman who is quite fond of her fairly quickly. The two dance, kiss, and for some reason, all eyes are trained on the new happy couple. But…where is the bride? I bring up the whole vampire legend because the other guests at this wedding start slitting wrists and throats and are drinking blood. Evie was the guest who was “invited” to this mansion, not the other way around. One would assume we’re still talking vampires, who desperately need a good showing on-screen in the absence of a good vampire flick over the last few years. To see The Invitation, you’ll have to catch it exclusively in theaters beginning the last Friday of the month.

If August wasn’t meant to be the beginning of Spooky Season, then why would Joe’s Harvest Pumpkin Spice coffee be available right now!?

Just picked this up over the weekend and enjoyed in a festive mug.