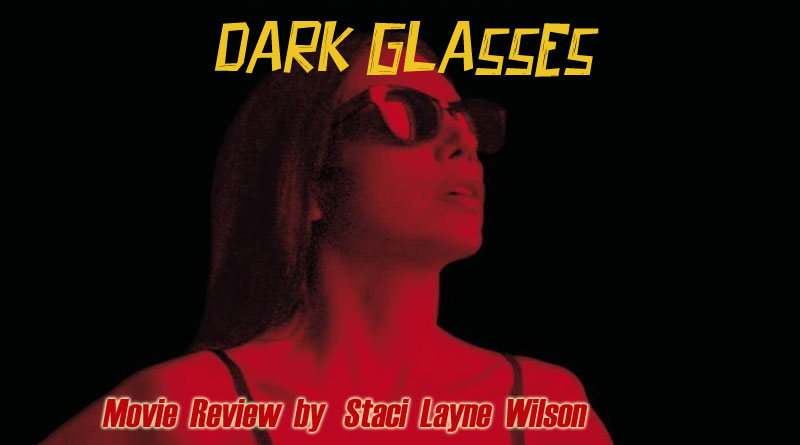 Legendary, genre-defining director Dario Argento is back with his (mostly) return-to-form giallo gore-fest Dark Glasses, starring a pulchritudinous Ilenia Pastorelli as the wearer of said specs. Argento has been laying low since his 2012 box office bomb, the dismal Dracula 3D, but it seems he’s had good reason to resurface—as an actor for avant-garde impresario Gaspar Noe in Vortex, and now as the director of the highly enjoyable Dark Glasses.

Dark Glasses begins with an eerie eclipse that blackens the sky on a sultry summer day in Rome, foreshadowing the darkness that will soon be thrust upon Diana, a high-class call girl just trying to make a buck when a serial slayer sets his steely sights on her. She narrowly escapes his clutches and screeches off in her car, driving madly into an intersection as he gives chase in his (what else?) white van. Diana’s vehicle collides with another in an intersection and she’s carted off to the hospital. She wakes up to discover that she has been blinded in the accident but the other car had it worse, killing the parents of a little boy who narrowly escaped death by being in the backseat. The deranged driver of the van escapes, free to stalk again and leaving no eyewitnesses (literally and figuratively).

As Diana struggles to adjust to her horrible new set of circumstances, she gets a guide dog and she visits the orphaned child, Chin (Xinyu Zhang), at the nunnery where he’s being cared for until next of kin can be located. Meanwhile, the killer keeps on killing… and is determined to finish what he started with Diana. The 82-year-old auteur’s daughter, Asia Argento, gets a meaty role as Rita, a kindly social worker who tries to help both Diana and Chin as they settle into their bleak new lives.

If you’re looking for blood, fear not. There’s a particularly gruesome murder early on, in which a streetwalker’s throat is slit—and the dread and suspense only ramp up from there. There are also Argento’s signature straight razors, black gloves, and sexy scenarios. The synthy music is very Goblin’esque, making for a fun, nostalgic aural treat courtesy of composer Arnaud Rebotini.

I watched the film in Italian with English subtitles and some of the translations are a bit clunky; nearly every time Chin is mentioned, it’s noted that he is Chinese. After the third or fourth mention of his ethnicity, I was rolling my eyes. There are also a few plot holes and perhaps the killer is revealed too soon but overall, Dark Glasses is a solid watch. The cinematography is not nearly as grand and stylistic as what was seen in Argento’s baroque glory days but the film looks crisp, clean, and colorful as shot by Matteo Cocco.

Viewers who know their Italian horror will more than likely agree that this flick is in the vein of Argento’s own 1977 classic Suspiria, mixed with a dash of compatriot Lucio Fulci’s flair for the sightless slasher (The Beyond, 1981)—but without any of the supernatural trappings. Particularly eagle-eyed fans will be treated to some cool shot-for-shot recreations from Argento’s other offerings (thankfully, they feel more like fun winks than retreads).

Dark Glasses clocks in at a lean, mean 87 minutes, never wearing out its welcome. If you love Italian horror in general, and Argento in particular, you cannot go wrong with this one. (All others, proceed with caution… giallo is not for everyone.)

Dark Glasses opens Friday, October 7 at the IFC Center in New York and at the Laemmle Glendale in Los Angeles, ahead of the film’s streaming debut via Shudder on Thursday, October 13. Additional theaters, to be announced later, will follow beginning Friday, October 14.