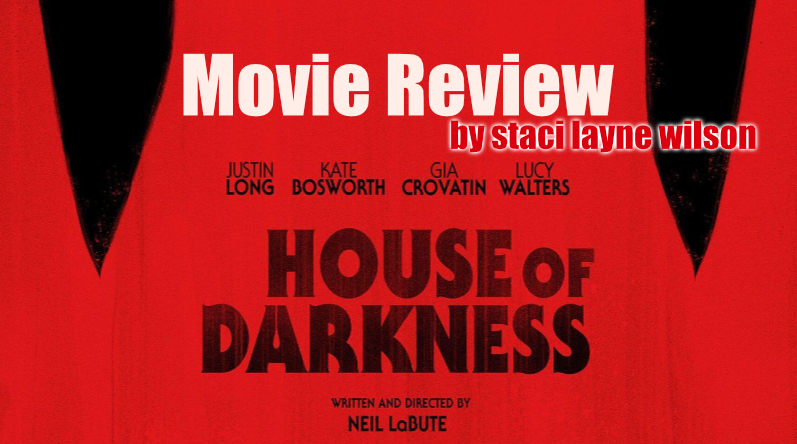 The Brides of Dracula meets Promising Young Woman in House of Darkness—a talky, darkly comic, horror chamber piece written and directed by Neil LaBute (Nurse Betty). The plot centers on a player, Hap (Justin Long, Jeepers Creepers), who thinks the beautiful, mysterious lady, Mina (Kate Bosworth, Before I Wake), who has asked him to drive her home from the bar where they met, is after the same thing he is: a hookup. While getting acquainted over a nightcap, their flirtation turns frightening.

After coming in for a drink, Hap (as in, hapless?) is surprised to see that his would-be conquest lives in an actual castle (the exteriors were shot in Arkansas, using the Dromborg Estate) and is only one of several she says her family owns—they’re scattered across the U.S., she says, not without a hint of pride. While she goes off the get their drinks, Hap calls his buddy, who was left behind at the bar, to boast of his great luck. Not only is Mina beautiful and almost certainly, easy, but she is also rich. As he’s stage-whispering into his phone, Hap starts to feel uneasy… is he being watched? He thinks he sees someone—not Mina—standing in the shadows but then he realizes it’s just a mirror. The lights go out, but surely that’s just because it’s a creaky old castle… right?

Mina returns with the cocktails and after some chitter chatter, the couple starts to kiss and more. Just as things are going great for Hap, another person enters the room, silent as a shadow. It’s Mina’s sister, Lucy (Gia Crovatin, Van Helsing). At first, Hap is flummoxed, but then he begins to think a threesome is being offered. He starts to feel woozy and slips into a strange dream, one in which he is locked away in a dungeon filled with the bones of those who were there before him. He wakes up and sees that he’s safe and cozy on the sisters’ sofa. He picks up right where left off: on the make. But first, Mina and Lucy insist, he must tell them a ghost story.

Writer-director Neil LaBute is famous for his battle-of-the-sexes themes, most memorable in his breakout 1997 hit, In the Company of Men. Those dynamics were also explored in the unintentionally hilarious Wicker Man remake of 2006. LaBute is also an accomplished playwright and viewers of House of Darkness will definitely get a “stagey” vibe from the dialogue, pace, and composition. The cinematography is dark and moody, while the music is appropriately minimal.

House of Darkness is made more interesting by the idea that we only see things from Hap’s male POV and while he’s not the most nuanced character, Justin Long’s inherent likability goes a long way in humanizing him even when he’s being a Class A douche. This isn’t to say that the sly sisters come off as complete villains, though their intent is made clear as the tense tete-a-tete unfolds. Part of Hap’s appeal as the wannabe smooth player is that he’s awkward and says all the wrong things; still, he is confident about closing the deal which is equal parts amusing and sad.

Some may struggle with even the relatively short runtime (83 minutes) due to the film’s lack of action and talkiness, but others will find their patience is a virtue. While the stage play vibe is not my favorite approach, it does work well here once you get into the groove—and yes, horror fans are eventually rewarded with a fair amount of gore.