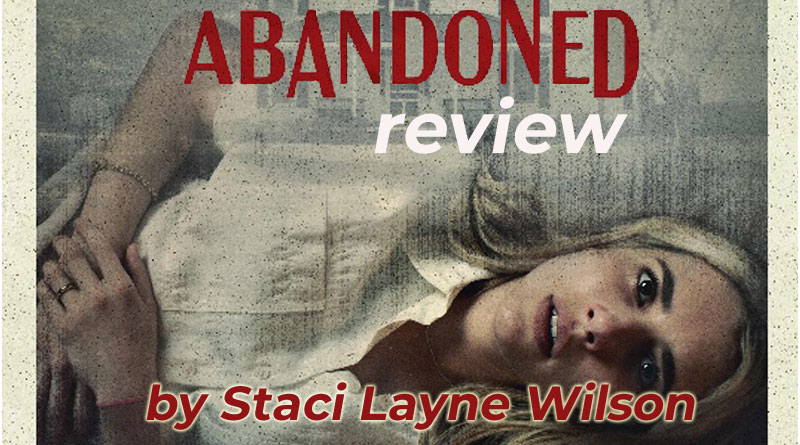 Abandoned is the kind of movie that makes me wonder “Why?” and “How?” Why did anyone really believe this screenplay needed to be greenlit and how did they get it financed? If I seem overly harsh, let me assure you that I don’t actually think Abandoned is a bad movie. But it’s not a good movie, either. It’s just another routine haunted-house flick with nothing new to add… but it looks pretty and it boasts a top cast, which is more than can be said for a lot of other straight-to-VOD horror offerings.

I really wanted to see it because I enjoy the actorly stylings of Emma Roberts (American Horror Story), John Gallager, Jr. (Come Play), and Michael Shannon (The Shape of Water). However, the rest of the team leaves something to be desired. The director, Spencer Squire, is an actor who’s making his directorial debut here; the screenplay is by Erik Patterson (lots of TV movies, kiddie fare, some R.L. Stine adaptations), and his writing partner (same credits), Jessica Scott. The folks behind the camera have little in the way of genre chops, and it shows.

Abandoned could have been an updated Burnt Offerings or Amityville Horror, but instead, it’s humdrum and follows an all-too-familiar path: young couple with baby moves into “murder house” after ignoring signs that things aren’t going to end well, ghosts come out, one of the residents loses their mind, a mystery unfolds, and rinse/repeat.

Here’s the dealio: Mild-mannered, vinyl-record-loving, bearded hubby Alex is a veterinarian whose farm animal expertise is much in demand, prompting the move to the big, spooky, old house, while laid-back wifey Sara is a full-time mom to their infant son, Liam (Marie May), who cries a lot and refuses to nurse. When Sara isn’t busy breast-pumping and mixing up formula, she’s getting drawn into the four-decades-old murder mystery that’s lurking beneath the floorboards and behind the walls of the mysterious house.

Alex is gone a lot, treating mysteriously sick piglets and the like, so Sara strikes up a friendship with the super-weird neighbor, Renner. On occasion, Cindy, the realtor who sold them the awful abode, pops in—she’s played by Kate Arrington, who gives the most spirited performance of the bunch—for a bit of exposition. While I won’t spoil the ghostly raison d’etre, suffice to say that something really, really, bad happened in the house and the residue of evil is everywhere. The flashbacks referring to the incident are presented as dreams or/and fugues into which Sara falls, which of course rattles her already fragile, post-partum-addled mind.

Horror fans will peg the screenwriters as folks who come from a watered-down TV movie background, and will certainly notice a lack of urgency in the directorial “style.” Loud noises fill in for actual dread, and the two parallel storylines never quite mesh in the lackluster screenplay. Fortunately, the setting (North Carolina) and the house (big, creepy) add an antebellum atmosphere, while the set design and overall look and feel of the film help make up for the lack of panache.

Abandoned is best left “abandoned” but if you are a haunted house movie completist, at least it does boast a name cast and has an appropriately spooky setting.