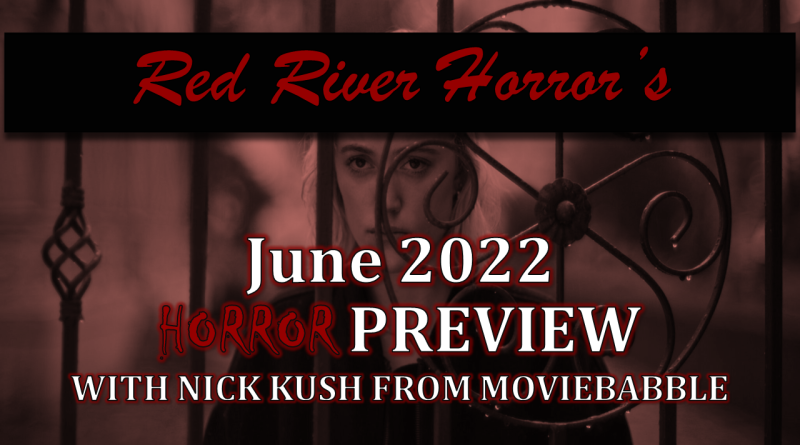 A horror legend returns this month to direct his first film in eight years. If you’re anything like me, you’ve been waiting years for David Cronenberg to make another film — we even had a film from his son in the interim. (A fantastic one at that.) Maybe you were even worried we’d never get another one. Lucky for us, the King of Body Horror is back with Crimes of the Future.

Although that might be the headliner of the month for many, thankfully, there’s even more to look forward to. Let’s dive into the June 2022 horror preview:

Maika Monroe is turning into something of a horror icon with indie favorites like The Guest and It Follows already under her belt. Her latest indie horror movie, Watcher, most likely won’t climb the ranks in the minds of horror enthusiasts like the other films mentioned, but it might scratch the itch of someone looking for stylish, if not exactly surprising, entertainment.

I watched (I’m the worst) Watcher at this year’s Sundance Film Festival. For a movie about a woman who thinks she is stalked by an unknown man who lives across the street and watches her through his window, Watcher is boilerplate stuff. You know exactly where this is headed — there are absolutely no surprises or twists to this formula. It’s frustrating in that respect, but Chloe Okuno’s crisp direction and Monroe’s naturally great performance is what will make it worthwhile for many.

Watcher will be available in limited theaters on June 3rd.

David Cronenberg has mentioned the struggle to get his ideas financed time and time again. It’s something he’s been tussling with his entire career, and it became even more difficult as the industry moved to more blockbuster fare in the late 2010’s. Thankfully, with the help of some producers and Neon, we now have Crimes of the Future, which appears to have plenty of Cronenberg’s signatures.

The word out of Cannes is that the film is actually a lot slower and more contemplative than than has been billed in the marketing material. But, for all the disgusting body horror he’s created over the years, Cronenberg has always couched those images in meditation. It’s not just about the horror, but what it evokes internally.

Crimes of the Future will be available in limited theaters on June 3rd.

If you don’t know Phil Tippett’s name, you certainly know his work. He led the visual effects for such classics as Star Wars and Jurassic Park. Maybe you’ve heard of them?

His latest project, Mad God, is thirty years in the making. A stop-motion dystopia filled silent characters hoping to survive as they encounter bizarre landscapes and creatures. Every piece of Mad God is handcrafted, thanks to a group of inspired animators.

Mad God will be available on Shudder on June 16th.

He may no longer be a part of the Doctor Strange creative team, but Scott Derrickson seems to be doing just fine pivoting back to low-budget horror with his latest, The Black Phone. The film has been a festival favorite, receiving very positive reviews and buzz from critics and fans alike. And it’s not hard to see why; Ethan Hawke, my pick for simultaneously one of our best and most underappreciated actors, gets to ham it up as a mask-wearing, sadistic killer who kidnaps children and locks them in his soundproof basement.

To help 13-year-old Finney Shaw (Mason Thames) escape, he uses a mysterious black phone in the basement, which connects him to the killer’s previous victims.

It’s very possible this is the sleeper horror hit of the summer.

The Black Phone will be available in theaters June 24th.

Catch the Fair One – June 4th (Blu-ray and DVD)

Where the Scary Things Are – June 28th (VOD and DVD)