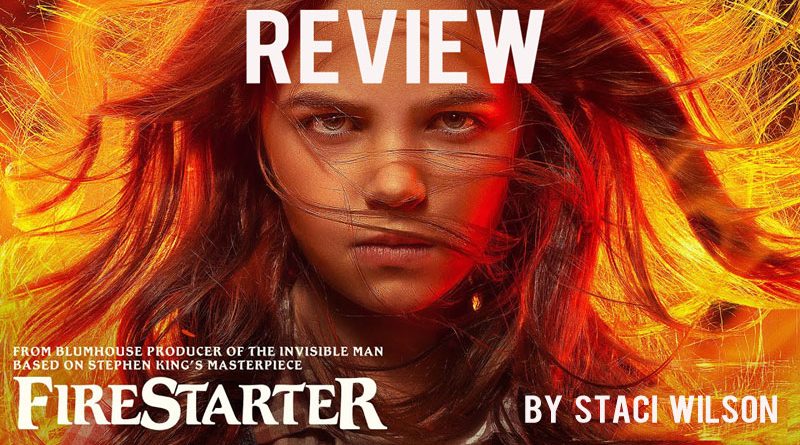 Let’s talk about the musical score of Firestarter, since it is far and away the best thing about the entire film. The first Firestarter, which was released in 1984 with an all-star cast, featured the spooky synth sultans, Tangerine Dream; in this case, we’ve got the incomparable horror maven John Carpenter pulling the strings (along with his talented son, Cody, with whom he’s collaborated on many projects and live onstage) and ramping up the tension.

The studio did send screeners to critics the day of the film’s release on Peacock, giving maybe an hour’s edge over the public, surely suspecting that bad reviews could tank Firestarter. Whenever a studio lacks confidence in its product, they don’t screen it; it’s a dead giveaway (which isn’t to say I haven’t seen a lot of good films—or at least ones that I enjoyed—that had bad buzz).

Having said all that, Firestarter is not horrible. It’s not great, mind you, but it’s a perfectly serviceable fright flick, especially if you haven’t read the Stephen King novel or seen the ’84 cinematic version. (And let’s face it, while we here at Red River Horror certainly have, the general public isn’t going to have the same rate of comparison.) Making matters worse, the filmmakers aren’t exactly standing on the shoulders of giants here… both the novel and the first film are not the cream of the King crop… they’re middling-to-good.

The premise is pretty clear-cut (not to mention outdated… telekinesis was the horror du jour of the 1970s and early ’80s… think: Carrie, The Fury, Scanners, etc.). Charlie McGee (Ryan Kiera Armstrong) is a little girl who can start fires with her mind. She can also make things spontaneously combust, throw fireballs, and burst forth with the occasional psychokinetic mind-meld. Her adoring parents, Andy (Zac Efron) and Vicky (Sydney Lemmon), have been hiding out for years, as they were test subjects for an experimental drug that imbued them both psychokinetic powers… but the lab associated with the experiments was shady, to say the least. So, they ran away and started new lives. They didn’t realize their DNA was altered, but soon found out when Charlie hit puberty and her genetics take over, causing her to start uncontrollable blazes whenever she’s upset. After blowing up a bathroom stall at her school, the evil experimenters figure out that Charlie is in the world and they want her. So, they send another “lab rat,” the powerful, seemingly soulless Rainbird (Michael Greyeyes), to get her. Of course, her parents put up a fight and the chase / battle of wills is on.

There are a few positives to Firestarter—the aforementioned music, the acting, and the warm, filmgrain-approximate cinematography—but they’re unfortunately overshadowed by bad directing, a worse script, and mundane editing. It’s a shame because I really wanted to like this movie. Once again: it’s not horrible; it’s a decent timewaster but it could have been so much more. It is Rated R, so at least gorehounds will appreciate the gooey, graphic special effects (some of these burn victims make Freddy Kruger look like an Estée Lauder face cream model). And, sharp-eyed King fans will notice a few Easter eggs nodding to his body of work (for instance, when Andy and Charlie stop for a rest, they’re next to a dumpster bearing a sign that says “Joyland,” which is the title of one of his books… what putting the sign on a dumpster says about that, is anybody’s guess).

Firestarter is very okay. If you think you might like it, you should check it out. If you’re already hating, then don’t bother.