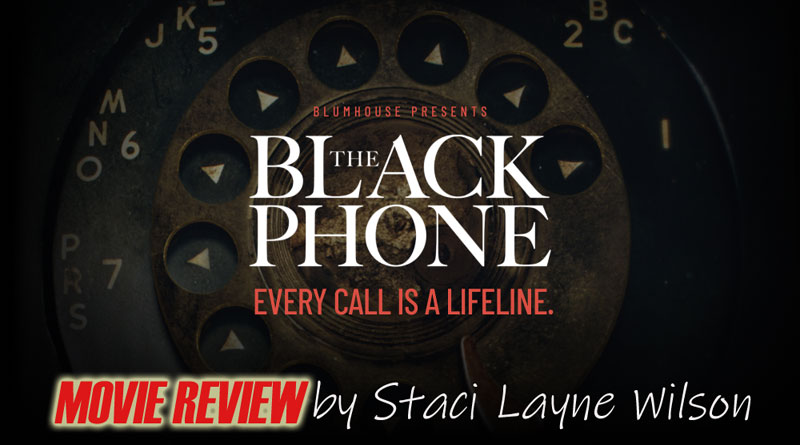 Set in 1978, The Black Phone is a bleak horror film that straddles a blurry line between reality and the supernatural. Reminiscent of “Stranger Things,” The Lovely Bones, and Split, we witness the corporeal world colliding with the netherworld when an adolescent boy, Finney Shaw (Mason Thames, Walker), is caught and held hostage by a notorious serial killer known as “The Grabber” (Ethan Hawke, Sinister).

Once he’s trapped in the basement, Finney begins to get calls from the eponymous black rotary phone that’s bolted to the wall but not plugged into anything. The communication is coming from the Great Beyond; the Grabber’s victims are trying to help Finney become “the final boy”—no longer a victim, but a survivor. From time to time, the villain creeps downstairs to taunt and to show off his array of gargoyle-like devil masks.

The Black Phone is based on bestselling author Joe Hill’s short story in his “20th Century Ghosts” anthology (2005), resulting in an adaptation that sometimes feels like a staticky, bad connection. There are quite a few elements that don’t add up. For instance, the child-killer targets adolescent boys who are “naughty” (bullies, delinquents) but Finney is a good kid. In fact, he’s a victim all around, from physical abuse at home, beatdowns at school, and finally, as a serial-slayer’s prey. At one point, the young man manages to pull the bars from a window but that’s as far as it goes… and although the Grabber is in and out of the room several times after that, he never notices the grate on the floor or the bare glass. We see a couple of the Grabber’s gets—he abducts in broad daylight, donning a black top-hat and weird white makeup, and he’s got a scary black van and holds huge bouquets of black balloons (a nod to IT)—no, not conspicuous at all! Also, several of his victims were big, strong, scrappy kids… none of them fought back? There’re a lot of head-scratchers like that throughout the film.

On the outside, Finney’s father and the police are searching for him, and his younger sister—wisecracking, foul-mouthed Gwen (Madeleine McGraw), who just happens to be psychic, is dreaming about where he is—a definite tip of the fedora to the Nightmare on Elm Street franchise here. But mostly, The Black Phone is set in the basement. The Grabber leaves Finney alive, but he doesn’t torture him or interact all that much; it seems the kid is there only as a “coming of age” plot device that pushes him to stand up for himself while also vindicating the Grabber’s ghosts.

Much is made of the late-70s setting, from avocado green Chevy Novas to knotty pine-paneled dens, and old-school pinball machines to a killer classic rock soundtrack—not to mention jumpcuts and filmgrain filters added in postproduction. This all adds to the patina of nostalgia and it’s well-done.

The Black Phone is R-rated but that’s mainly due to foul language (75% of which spews from young Gwen’s sailor-mouth). There’s violence, mostly from schoolyard fistfights. The few kills we do see aren’t as bloody as most genre fans hope—it’s certainly not a slasher. The Black Phone is along the tonal lines of director Scott Derrickson and Ethan Hawke’s previous pairing, Sinister (2012) but it’s less eerie. Hawke isn’t given much to do in terms of his star power, and James Ransome, who plays the Grabber’s clueless brother and roommate, feels shoehorned in. But fortunately, we have a welcome new discovery in Thames—he’s a solid actor who brings depth and pathos to his role. We care about Finney and we want to see him win.

For me, this flick was just okay. It’s not as gripping as X, not as gory as Studio 666, and it’s not as fun as Scream, but The Black Phone is an adequate thriller that boasts some genuine jump scares and a ghoulish villain. It’s worth a look.