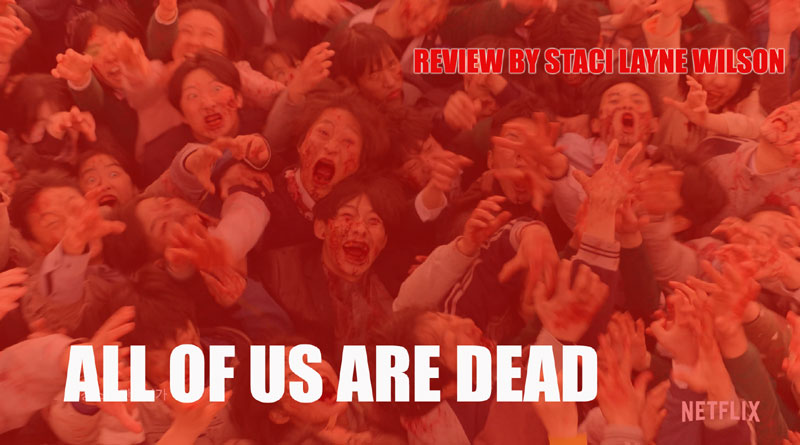 All of Us Are Dead is based on a Korean webtoon called Now at Our School. Joo Dong-geun’s digital comic was made up of 130 short episodes that concluded in 2011. Eleven years later, Netflix is reviving the idea with live-action cast starring Yoon Chan-young (Do You Like Brahms?) and Cho Yi-hyun (School 2021). The series also features Park Ji-hu, Lomon, Yoo In-soo, Lee You-Mi and Lim Jae-hyeok.

The 8-episode, 1-hour series throws the student body of a high school into an intense battle for their lives against a growing horde of bloodthirsty zombies—and even other frenzied, panicked survivors who will kill to escape. The presentation starts off strong with a cold-open showing “Patient Zero,” a bullied teen who turns the tables on his attackers with a show of superhuman strength and aggression. As it turns out, he hasn’t just been working out and taking self-defense classes… he’s been genetically altered in an experiment gone wrong. Rather than aiming for the head with a shotgun, this undead creature is killed by a bash to the brains with a Holy Bible. After the credits, there’s a lull as we meet our main protagonists and find out who has a crush on who, which teachers are tough, and get to know a smattering of well-meaning but clueless parents. We also see the science lab in the high school, where clandestine experiments are going on—there’s a scene with a zombie hamster that’s quite memorable!

As the series unfolds, a teacher with a sinister motive to help the zombies emerges, an unwitting busload of fresh blood arrives, and the outside world is oblivious to the impending zombie apocalypse. The high school students are quite resourceful, using martial arts skills, gym equipment, and whatever else is handy to keep the marauding masses at bay. They know all about zombie movies—Train to Busan gets a shoutout—but they soon learn that these infected attackers are quite a bit different from what they expected. As is the daily custom, the kids’ cellphones are locked away every morning before class, so calling for help is difficult but not impossible. When they find a zombified student’s phone on the floor there is a humorous scene as they try to unlock her device with face recognition… but she’s a snarling, distorted mess so it doesn’t quite work. There’s another terrific scene, early on, when a bullied girl is standing on the rooftop of the school, about to jump to her death. When she peers down the depths from her precarious perch, suddenly, bodies begin to projection-launch through the windows from the floors below, sprawling to the ground and then coming back to life. Needless to say, this gives her pause!

So, there are indeed some imaginative moments in All of Us Are Dead. And as it progresses, it gets very, very gory. However, this is a show for teenagers (despite some rather shocking language; in one scene, a grown man calls a teenage girl a c**ksu**er) so there’s not much for us O.G. horror fans to enjoy. We’ve seen all this before and when all is said and done, this series probably won’t be the next Squid Game (or even Train to Busan). The drama/trauma of high school life, parents, and puppy love aspects just didn’t do it for me. Some of the acting is really over the top, and the dialogue is clunky at times (it could be the translation; fortunately, the English dubbing is well-done), and music/score choices are odd.

Having said that, if you’re a zombie fan, you’ll probably tune in anyway. All of Us Are Dead will reward you with some great kills and killer effects.

All of Us Are Dead is one of several Asian creations coming to the Netflix platform in 2022, along with a Korean remake of the Spanish crime drama Money Heist, and the thriller Surname. The 8-episode season of All of Us Are Dead will hit Netflix with a bloody splat on January 28.