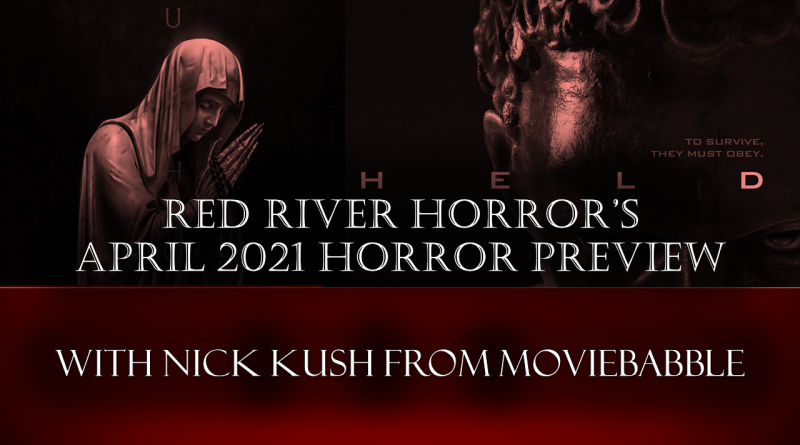 Coming off the neon-infused mayhem that is Godzilla vs. Kong, April shifts away from blockbuster fare to low-budget horror. Some seemingly produced with more ingenuity than others…

Without delay, here is your April 2021 horror preview:

As a cute wink to all the believers out there, there is almost always a horror film tied to the week of Good Friday. Last year would have seen the release of Saint Maud in a non-COVID world; this year, we get The Unholy. In it, Alice (played by Cricket Brown, my new favorite actor name) stars as a woman who claims to have the healing powers of the Virgin Mary. A journalist played by Jeffrey Dean Morgan is understandably skeptical, and goes to her town to investigate. But to his amazement, her powers seem to be true. Among other deeds, she helps a wheelchair-bound kid walk again, and quickly amasses a following. Although, Morgan’s character soon begins to wonder if this is all the work of Mary, or some other, much darker, presence.

I recommend you tread carefully here: The Unholy is released through Screen Gems (a division of Sony Pictures) which has a less than ideal track record when it comes to horror. Their last horror release: the reboot of The Grudge. Oof.

The Unholy will be available in theaters on April 2nd.

A married couple heads off to an isolated vacation house for a weekend getaway in hopes of rekindling the spark in their relationship they have lost over the years. Immediately, the house is taken over by masked assailants, who trap them inside and watch over them through various hidden cameras. The couple is forced to carry out various tasks by a voice over an intercom, who slowly reveals damning and private information about their relationship. Before they turn on each other for good, they must figure out what the reason for all of this is.

Held appears to be a nice twist on the home invasion thriller. Hopefully it’s worthwhile!

Held will available in theaters and on VOD on April 9th.

In a very small town, everything revolves around Pastor Jakob Fedder’s church. But his wife Anne feels mostly unsatisfied. When an old flame comes to town, Anne feels tempted, but before she can fully act on her urges, a cloaked figure known as “The Master” appears and attacks Anne, turning her into a vampire. Soon enough, she grows fangs and has a serious taste for blood. Luckily for Jakob, she still tends to her housewife duties by dancing around the house and rearranging furniture with a cup of blood in her hand, which is pretty wonderful if you ask me.

Jakob’s Wife appears to embrace its low-budget, rough-around-the-edges nature — the casting of Crampton and famed low-budget director Larry Fessenden in the lead roles seem to be a tip of the cap to all those trying to make their visions come to life on the cheap. If you like goofy low-budget horror, this one may be for you.

Jakob’s Wife will be available in theaters and on VOD on April 16th with a planned release on Shudder to follow shortly after.

After the disappointment that was his remake of Alfred Hitchcock’s Rebecca, Ben Wheatley has returned to form with In the Earth, a pandemic horror movie. Notably, the film was the first movie back into production in the U.K. after their lockdown, and the film was shot in secret over only 15 days.

Wheatley has stated that the film isn’t necessarily about the current pandemic, but more of a response to it. The film — which had its premiere at this year’s Sundance Film Festival — stars Joel Fry and Ellora Torchia as two scientists who venture into the woods to make contact with another scientist they haven’t heard from in months. Immediately, things go wrong. The forest begins to come alive, and Fry’s character suffers a foot injury that Wheatley loves to make go squish.

The very fabric of the film falls apart. All logic disappears. Reality becomes completely distorted. In the Earth is a great example of economic horror storytelling, using its own scrappiness as a tool to make the terror even more upsetting. It’s relentlessly messy, but that’s also part of the fun.

In the Earth will be available in theaters April 16th.

Every Breath You Take – April 2nd (Theaters and VOD)

Shadow in the Cloud – April 6th (Blu-ray and DVD)