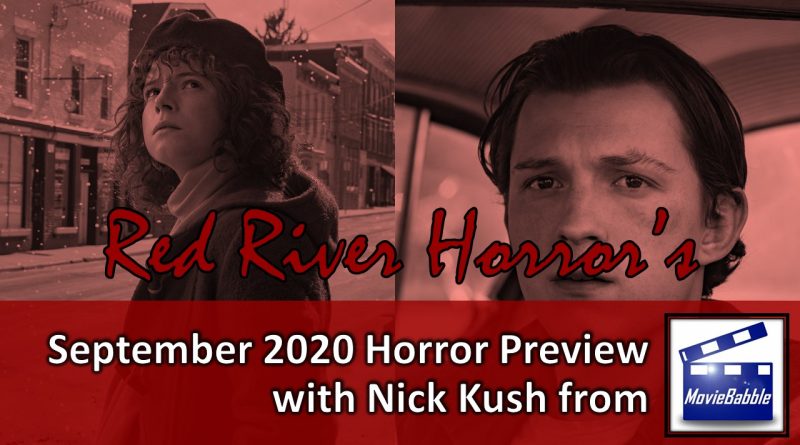 Even before the era of COVID-19, September has always been an odd month for horror films. With October waiting in the wings, many studios keep their A+ horror material for the lead-up to Halloween, leaving the start of the fall seaon fairly quiet. (In the meantime, if you’re struggling for your horror fix, be sure to check out Shudder’s 61 Days of Halloween, which has new Shudder originals and streaming service premieres dropping regularly through next month.)

Luckily, Netflix (along with Lionsgate due to COVID-related delays) is picking up the slack with the release of two major thrillers.

Let’s take a look at all that’s coming our way in the September 2020 horror preview:

Early buzz on Charlie Kaufman’s i’m thinking of ending things — other than the thousands of jabs made at it for its all lower-cased title — is it’s largely indescribable, blending drama, thriller, and horror elements together in an attempt to explain the unexplainable sensation of creeping existential dread.

With Jessie Buckley leading an amazing cast that includes Jessie Plemons, Toni Collette, and David Thewlis, i’m thinking of ending things is yet another exploration of the human spirit from Kaufman, who has made his career on writing and directing challenging psychodramas. But this film has seemed to leave critics even more baffled as a story of a a girlfriend getting snowed in with her boyfriend and her parents quickly turns into the surreal. Odds are you may finish it scratching your head, but Kaufman is one of the best writers in Hollywood, and each of his films should be appointment viewing.

A writer finds herself trapped in a reality-altering scheme, which, from the trailers, seems to consist of racist elites pulling Black people back in time to the antebellum south somehow. Once touted as a possible surprise hit of the spring before COVID-19 pushed back its release date, Antebellum has received largely negative early reviews ahead of its theater/VOD hybrid release.

Looking back on the marketing material for the film which has been extremely coy in explaining any details, perhaps it all was more of a ploy to hide some of the films flaws, as many critics have claimed Antebellum is thuddingly obvious and shallow in its messaging. All I know Janelle Monae deserves better — someone get her a great starring role ASAP!

Evil and corruption is lurking on all sides as Arvin (Holland) attempts to keep his family safe. The cast sure looks game (just listen to Pattinson’s slimy preacher voice!) but I’m most excited for this movie because of Campos, who has shown he can match deep character studies with overtly grim material. His last film, Christine (no, not the John Carpenter evil car film), is one of the best modern depictions of depression onscreen. While The Devil All the Time is larger in scope, he seems like a perfect match for this kind of film.