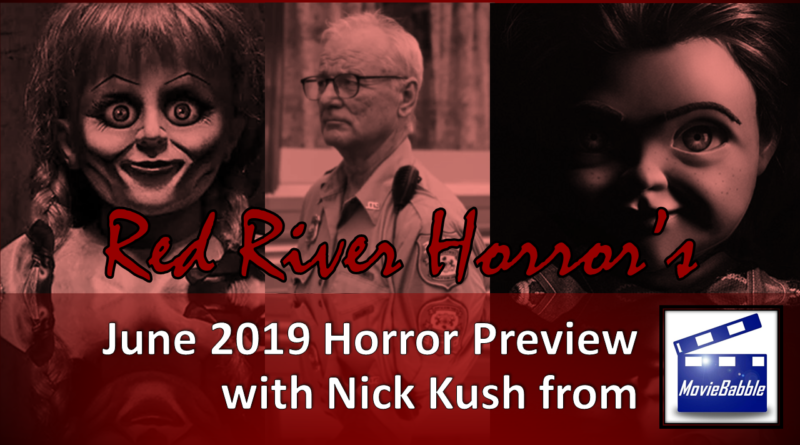 Though we’ll have movies like Dark Phoenix, The Secret Life of Pets 2, Men in Black: International, and Toy Story 4 open in what is the middle of the summer movie season, June should still be an interesting month for horror fans, being that we’ll see the theatrical revival of a horror icon and a continuation of one of the more lucrative horror franchises ever in The Conjuring Universe.

And as I enter the month, I have no sense how it will play out in terms of critical success. But I’ll do my best to break down the situation for you in any way I can! (If I fail, please divert all hate mail to redriverhorror@gmail.com — it’s best if Supreme Overlord Ed handles it so my fragile ego can stay intact.)

Jim Jarmusch is an odd director with many quirks, which is probably why a lot of his films haven’t had major mainstream success. (His highest grossing movie was Broken Flowers, the 2005 Bill Murray vehicle.) But his movies are always acclaimed in some way, which is why The Dead Don’t Die, a horror comedy about the dead rising in a small town, might be able to break out and become a sleeper hit.

So we’re getting a reboot of Child’s Play, mostly because of corporate shenanigans. Allow me to explain:

Although Universal Pictures holds the rights to the ongoing Chucky franchise, which has gone straight to VOD in the last decade, MGM still holds the rights to the original Child’s Play, which essentially allows them to do as they please and reboot the entire series for their own financial gain. But to add more confusion to the mix, the original continuity will move forward with Universal as a TV show set to premiere in 2020.

“These timelines are so confusing!” Where’s Deadpool when we need him?

It appears that 2019’s Child’s Play went to the Terminator: Genisys School of Soft Rebooting an 80’s Film By Infusing Modern Technology Into It in a Way Only a 40-Year-Old Would Understand. (It’s a fairly small school — hopefully, attendance stays that way.) Chucky is now an app, attacking those around him through the evilness of the Cloud.

Well, at least Chucky is voiced by Mark Hamill? Yay?

Now that we’re done licking our wounds from the mess that was The Curse of La Llorona, we now have another movie that takes place within the world of the Conjuring: Annabelle Comes Home.

The third movie surrounding the devil doll finds Ed and Lorraine Warren (with Patrick Wilson and Vera Farmiga reprising their roles) locking Annabelle away in their locked artifacts room in their house…because that’s an entirely safe room to have with kids roaming around the same house.

Look, by now, you know the drill with these Annabelle movies. Mistakes happen, Annabelle is freed, demons try to take over kids, people turn to some sort of religion…yada, yada, yada…jump scares. The end.

I suspect you already know whether or not you’ll see and enjoy this movie.

The Haunting of Sharon Tate – June 4th (VOD and DVD)