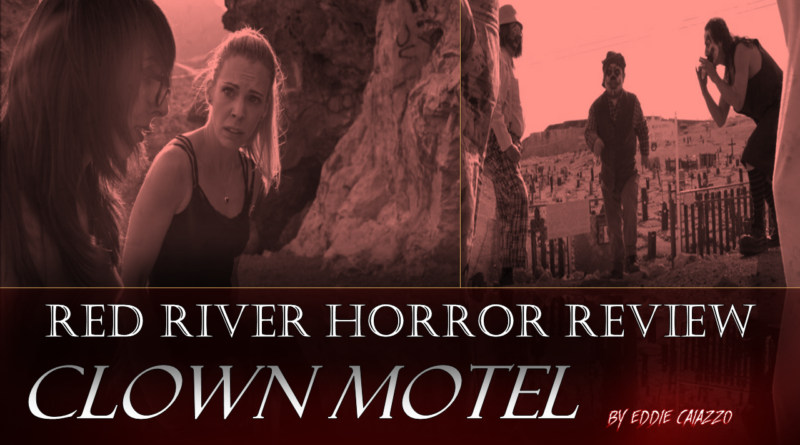 Send in the clowns. And why not? The horror genre has been the perfect on-screen home for the lovable jesters in grease paint. Dress up the original Jason Voorhees (Ari Lehman) as a clown…pit him against the OG unmasked Michael Myers (Tony Moran), throw in some (attractive) young ladies and men as fodder in the middle, and set the tale at the terrifying Clown Motel in Tonopah, Nevada.

This sounds like the perfect recipe for a 1980s-style VHS horror release, complete with colorful display box artwork for a genre fan to pick out of the lot at a local video rental store. And that’s a very good thing!

Clown Motel, much like the recent horror flick Death House, was demanded by horror fans. A successful Kickstarter campaign generated more than $50,000.00 to bring Kelly’s Clowns to the screen.

After the cold open featuring both Lehman and Moran, the real story begins. Bachelorette Brooke (Elinor Price) and three of her friends are heading from Las Vegas back to Los Angeles. Three ghosthuntin’ dudes are on the same course, heading to the Motel to film their next online video. Both parties end up at the Clown Motel together and are ultimately stuck because of car trouble brought on by the creatures with the big shoes and squeaky red noses.

Each time a clown makes a kill, another one of their brethren rises from the adjacent graveyard. This becomes a deadly numbers game for the film’s protagonists.

Right now, nostalgia is a big deal in the horror genre, with remakes of old favorites and John Carpenter-style scores currently populating the landscape. Even Andy Muschietti’s IT (2017) was set in the 1980s as opposed to the 1950s.

The film’s writer/director/producer, Joseph Kelly, successfully stays away from the path of nostalgia, and instead delivers a more straightforward slasher flick. Also, the colors in this film seem to hit the entire spectrum at the right times. Especially when we see the clowns on-screen.

While we’re not always given the best dialogue or delivery from Clown Motel‘s characters, we are given good kills with nice practical effects to satisfy our inner slasher-lover.

Lastly, Clown Motel is at its best when the clowns are on-screen. Even though they’re the bad guys, you’ll find yourself rooting for them on more than one occasion. If you love (or hate) clowns, and want to see a fun straightforward slasher flick set in the creepiest hotel in America, Clown Motel might just be for you.

Interested in funding the final stages of Clown Motel? visit the Indiegogo page — https://www.indiegogo.com/projects/clown-motel-dark-horror-film-finishing-fund#/. Stay up-to-date on screenings and fun facts with the cast and crew at https://www.facebook.com/ClownMotel2016/.