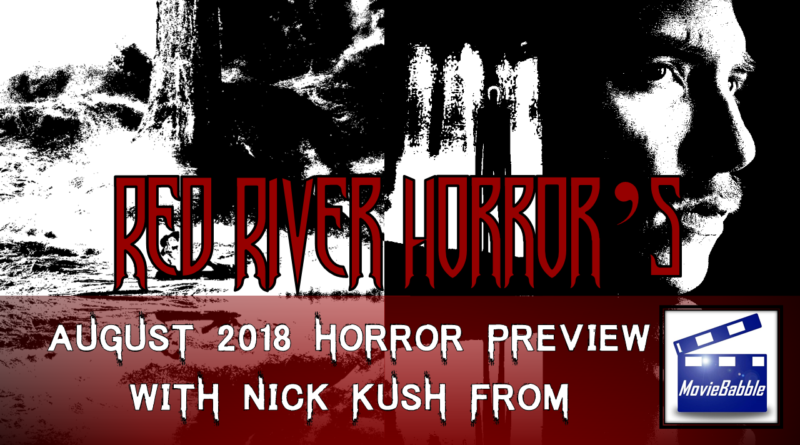 August is an odd month for film. The summer movie season starts to wind down as Labor Day approaches, and we start to see an odd collection of films that might get an Oscar push… or they’ll be forgotten in a few short days because they have less substance than a rotted tube sock. To put it bluntly, it’s a crapshoot. But sometimes, that makes it a little more fun when you decide on which movies to watch.  “You never know what you’re going to get!”

I can feel the internet collectively shaking its head at me for that half-hearted Forrest Gump reference, so let’s just move onto the August 2018 horror preview before I lose any more goodwill.

The fun of “Shark Week” continues as Warner Brothers launches its massive tale of the legendary Megalodon to IMAX screens nationwide, appropriately titled THE MEG.

Director Jon Turteltaub casts action star Jason Statham to take on the prehistoric over-sized menace of the sea.  Statham plays Jonas Taylor, who has previously survived an attack by what he claims was a 70-foot shark.  No one believes his tale of the beast, including his now ex-wife.  But…now she and her team are trapped on a sunken sub, hunted by the very monster Taylor warned about.  Ruby Rose and Rainn Wilson also star in this $150,000,000 million-dollar summer blockbuster.  Hey, at least it’s not another Comic Book movie, right?

Sony and Screen Gems’ Slender Man has a ton of things going against it. The first trailer sparked an outrage with many citing that Sony was using a tragic, real-life story for capital gains.  That camp of people only grew louder as the trailer did nothing to take the spotlight off the controversy.

But what’s even worse is that this film wreaks of a calculated ploy for a low-budget horror film to earn its budget back in its first weekend in theaters. It’s a high-concept plot mixed with a PG-13 rating, and Screen Gems isn’t exactly the best endorsement for quality. The last five films they’ve distributed are When the Bough Breaks, Underworld: Blood Wars, Resident Evil: The Final Chapter, Keep Watching, and Proud Mary. Oof.

Maybe you ought to stay home this weekend.

There’s only one other major theatrical release that deals with horror elements that might make up for Slender Man’s lackluster performance (you can trust me on that one). That film is Focus Features’ The Little Stranger starring Domhnall Gleeson. Gleeson plays a detective that returns to a large, Victorian mansion that has notched some recent disturbances. With the help of those that live there (including Will Poulter as a disfigured war veteran), Gleeson’s character begins to track the disturbances back to a little girl that lived in the house years ago.

From the director of Room (no, not The Room, just Room), The Little Stranger is poised to become a serious critical success with a plot that hints at added layers underneath the surface. As Gleeson says at the end of the trailer, “what happened next was a mystery to me,” so you can be sure that there’s much more to this film than scares. There also appears to be a significant amount of pathos added to the ghostly figure, where the ultimate journey of the detective will be to understand the spirit, not rid the house of it blindly. Adding bits of subtext to it all is exactly what more horror/thriller films need to do.