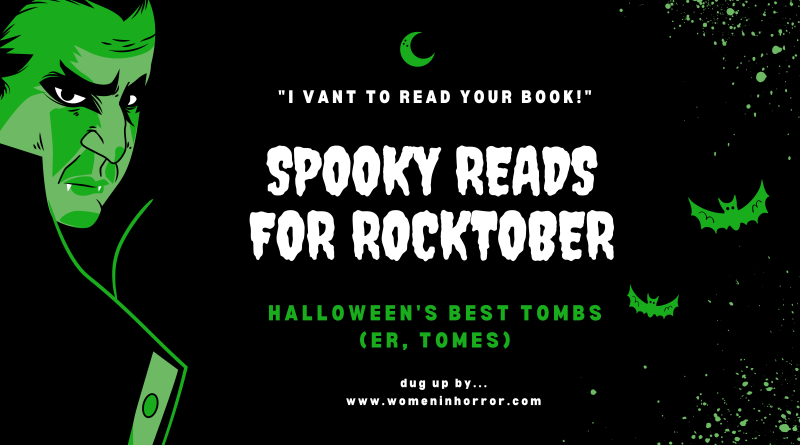 Shock rock, bone-chilling books, and Halloween go together like Freddy Kreuger and a good night’s sleep. That’s why we, in conjunction with Women in Horror, put together this Top 10 list of the best reads (and audiobooks) that will have you rocking and rolling all night long!

1) Paul Is Undead: The British Zombie Invasion, by Alan Goldsher

For John Lennon, a young, idealistic zombie guitarist with dreams of global domination, Liverpool seems the ideal place to form a band that could take over the world. In an inspired act, Lennon kills and reanimates local rocker Paul McCartney, kicking off an unstoppable partnership. With the addition of newly zombified guitarist George Harrison and drummer/Seventh Level Ninja Lord Ringo Starr, the Beatles soon cut a swath of bloody good music and bloody violent mayhem across Europe, America, and the entire planet.

2) We Sold Our Souls, by Grady Hendrix

Every morning, Kris Pulaski wakes up in hell. In the 1990s she was lead guitarist of Dürt Würk, a heavy-metal band on the brink of breakout success until lead singer Terry Hunt embarked on a solo career and rocketed to stardom, leaving his bandmates to rot in obscurity. Now Kris works as night manager of a Best Western; she’s tired, broke, and unhappy. Then one day everything changes—a shocking act of violence turns her life upside down, and she begins to suspect that Terry sabotaged more than just the band. Kris hits the road, hoping to reunite Dürt Würk and confront the man who ruined her life. Her journey will take her from the Pennsylvania rust belt to a celebrity rehab center to a satanic music festival.

3) The Vampire Lestat, by Anne Rice

The vampire hero of Anne Rice’s enthralling novel is a creature of the darkest and richest imagination. Once an aristocrat in the heady days of pre-revolutionary France, now a rock star in the demonic, shimmering 1980s, he rushes through the centuries in search of others like him, seeking answers to the mystery of his eternal, terrifying existence. His is a mesmerizing story—passionate, complex, and thrilling.

4) The Scream, by John Skipp and Craig Spector

As waves of teens cranked it up and poured it on, parents built walls of accusation to explain their offspring’s seeming corruption. Sex and drugs, demon worship and violence are the effects. Music is the cause. Or so the self-styled guardians of morality would have us believe. Meet The Scream. Just your average everyday mega-cult band. Their music is otherworldly. Their words are disturbing. Their message is unholy. Their fans are legion. And they’re not kidding. They’re killing. Themselves. Each other. Everyone. Their gospel screams from the lips of babes. Their backbeat has a body count. And their encore is just the warm-up act to madness beyond belief.

Tune in, turn on, and drop in… to the rock & roll rabbit hole! Along Comes Scary is set in an alternate spooky ’60s where vampires play screaming guitars, hellbound hotrodders start a new trend on AM radio, and there are groupies who will do anything for a piece of their favorite band. Stories include Papa’s Got a Brand-New Body Bag, Hell-A Woman, and She’s Got a Ticket to Die. 10 stories by Staci Layne Wilson, Jeff Strand, Darren Gordon Smith, Marco Mannone, Renee Mallett, and Shane Bitterling.

An aging death-metal rock god, Judas Coyne, is a collector of the macabre: a cookbook for cannibals… a used hangman’s noose… a snuff film. But nothing he possesses is as unlikely or as dreadful as an item he learns is for sale on the Internet. For a thousand dollars, Jude will become the proud owner of a dead man’s suit, said to be haunted by the deceased’s restless spirit. Judas has spent a lifetime coping with ghosts – of an abusive father, of the lovers he callously abandoned, of the bandmates he betrayed – so what’s one more?

7) The Five, by Robert McCammon

The Five tells the story of an eponymous rock band struggling to survive on the margins of the music business. As they move through the American Southwest on what might be their final tour together, the band members come to the attention of a damaged Iraq war veteran, and their lives are changed forever. The narrative that follows is a riveting account of violence, terror, and pursuit set against a credible, immensely detailed rock and roll backdrop. It is also a moving meditation on loyalty and friendship, on the nature and importance of families—those we are born into and those we create for ourselves—and on the redemptive power of the creative spirit.

In the ruins of a haunted medieval abbey, four musicians hope to tap into the site’s dark history—an experience that almost destroys them. Thirteen years ago on a cold December night, a rock band called The Philosophers Stone gathered in the ancient ruins of an abbey to record their new album. The evening ended in bloodshed and death. Now, the tapes from that fateful recording session have been released as The Black Album, and the scattered members of the band know it’s time for a reunion. Time to return to that dark December night—for one final performance.

Lucas dreamed it every night…the glittering rock show; ear-punching heavy metal music; gaudily costumed, outrageous performers; an insane mob that storms the stage. Kristen, his beloved daughter, dying, pounded bloody and broken by feet and fists. Kristen, dead-as dead as Lucas’ most hidden desires. In Lucas Ellington’s eyes, the mindless crowd of rock n’ rollers is blameless. His child was murdered by Whip Hand, the Ultimate Party Band. The main event. Whip Hand dissolved soon after the arena disaster but the musicians are still alive out there, still alive and kicking. Not for long. Lucas has sacrificed one set of dreams; he will not surrender another. Instead of Kristen, he cradles revenge to his breast.

Put on your headphones. Open this electrifying book. Rock to the world of horror where martyred musical super-legends return from the dead at 120 decibels… where radio stations sponsor ghastly giveaways that no living soul could want … where other-earthly pirates bootleg not records, but human souls… where people are strange … and the devil rocks all night. Stories by Stephen King, F. Paul Wilson, Richard Christian Matheson, Nancy A. Collins, and other stars of 90s shock fiction.