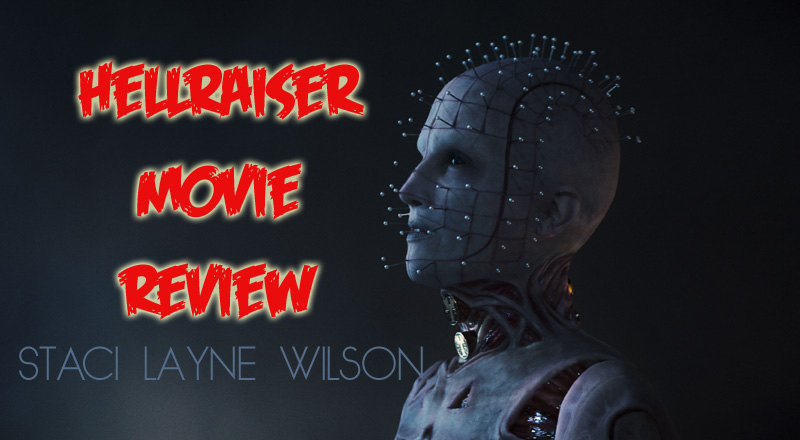 All horror movies involve pain of some kind—psychological, physical, or a combination of both—but Clive Barker’s original Hellraiser (1987, based on his bestselling purple prose) was about loving pain… to death.

Having said that, I am happy to report that this Hellraiser reboot is well worth a watch and it’s probably the best of the batch since Hellbound: Hellraiser II (1988). Disney, via Hulu, is two for two this year, having also produced the exceptional Predator film, Prey, earlier this summer.

Hellraiser opens on a sick, slick, upscale fete hosted by a depraved and sadistic billionaire, Roland Voight (Goran Visnjic), who has a very twisted party favor, LeMarchand’s Box (aka, the Lament Configuration). Fast-forward a few months, and the box is sitting in storage, just waiting to be found by some hapless, unsuspecting soul. Recovering pill-popper Riley (Odessa A’zion) and her sleazy new boyfriend Trevor (Drew Starkey) are looking for a get-rich-quick fix and they find it in the ancient puzzle box—but before they can fence the Rubik’s Cube from hell, they accidentally summon some rather unfriendly extradimensional beings.

While the Cenobites—The Priest, The Masque, The Gasp, The Chatterer, The Asphyx—are the stars of this horror hoedown, most of our time is spent with mere mortals. Riley is a good character, and thankfully A’zion imbues her with more than what was on the page. The billionaire, the boyfriend, and Riley’s brother Matt (Brandon Flynn) are all pretty standard-issue as well in terms of broad archetype strokes, but there’s not a bad actor in the bunch.

When the supernatural villains do show their stuff, we’re treated to the whole Gothic gordita, with black leather, chains, hooks, glistening guts for garters, and more, all set to eerily angelic choral music with Industrial muscle behind it. Effects artists Josh and Sierra Russell worked with director David Bruckner on his previous films, The Ritual (2017) and The Night House (2021), and they bring concept designer Keith Thompson’s nightmarish trickery to freakish fruition. The contortions and perversions of the Cenobites’ flesh are very imaginative, indeed. While Doug Bradley was an excellent Pinhead, Jamie Clayton’s performance actually brings the villain closer to its androgynous origins on the page—“Its voice was light and breathy, the voice of an excited girl”—and she, well, nails it. Clayton combines grace and menace with spine-chilling poise. What’s more, Roland Voight’s mansion of mayhem is a grand, labyrinthine structure that emulates the puzzle box in ways that are reminiscent of the houses in Dario Argento’s Inferno (1980), or Thir13en Ghosts (2001).

If I have a complaint, it’s that the movie is just a tad too long for its simple storyline and after the cold open, it does take quite a while to get back to the Cenobite carnage. The kills are good but don’t expect the same level of gooey, gory savagery as seen in the ’80s films. Overall, Hellraiser 2022 is a helluva good time, offering style, substance, and sinister sights.

Watch Hellraiser on Hulu when it premieres on October 7, 2022.