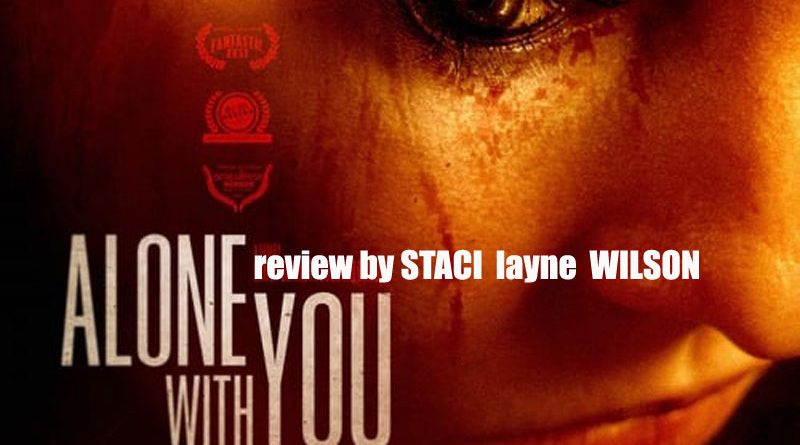 Alone With You is a single-location, slow-burn, mind-twisting horror that follows Charlie (Emily Bennett), a young woman who is struggling to recapture the romance she once felt with her unfaithful girlfriend, Simone (Emma Myles). The pair live together in a cozy but somewhat creepy apartment that’s full of the props and artifacts that Simone uses in her calling as an avant garde photographer. When Emily returns home from a long day, she expects Simone to have returned from a short trip, but instead she finds herself alone and trapped with nothing but strange goings-on to occupy her time and her mind.

Lo-fi single-location films can work well, particularly if the tale is dialogue-driven. But with only one character, the filmmakers (Bennett, who, along with Justin Brooks, is the writer/director) rely on the occasional video chat (with horror icon Barbara Crampton playing Charlie’s judgmental mom) and flashbacks that show Simone’s betrayal. For most part, it works. For those who enjoy this sort of thing, you may find yourself thinking of The Tenant (1976), House of the Devil (2009), or the more recent Swedish suspenser, Knocking (2021).

As Charlie settles in for her long dark night of the soul, she finds herself being rattled by odd sounds, tricks of time, dead phones, doorknobs that won’t turn, and blocked windows that reflect only her own gloomy countenance. Dying for a connection of some sort, Charlie facetimes her mom, who coldly informs her that grandma has died and needs to be buried with the cross pendant that she’d earlier bequeathed to Charlie. Charlie says she’s lost the religious keepsake, which sends Mom into a near rage. The connection fritz’s out and a subsequent call is made, but it’s even more fraught with friction.

Crampton’s screentime is minimal, but it’s always good to see her and she always adds depth and dimension to even the most insubstantial roles. Myles, who is seen only in flashbacks and dream sequences, also does a great job as someone relegated to the sidelines—fans of her as Leanne in Orange is the New Black are in for a treat. I wasn’t crazy about Thea (Dora Madison), another facetime character who pops in and out; the actor was fine, but the “bitchy best friend” thing is a bit over-the-top and didn’t fit with the eerie vibe of the film.

Alone With You really is Bennett’s show, and she carries it well. As the cowriter, codirector, and lead, she has a lot to do. The cinematography is rich, warm, and darkly delicious, while the subtle score adds just the right amount of tension without fraying one’s nerves. The main failing, if any, is an overlong runtime (this really does feel more like a short than a feature) and a rather laissez-faire approach to the editing.

If you’re a fan of slowly unraveling psychological thrillers, unreliable narrators, (and Barbara Crampton!), Alone With You is definitely worth a look.