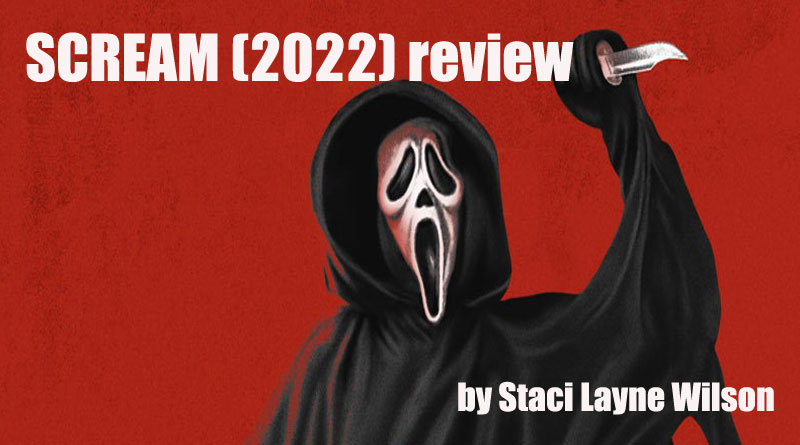 In the real world, it has been 11 years since Scream 4, and in the fictional franchise ’verse, it’s been 25 years since a barrage of brutal, gory knife murders shocked the sleepy town of Woodsboro, California. Finally, a new killer dons the iconic Ghostface mask and targets a group of smart-ass teenagers who all have blood ties to the original crimes.

This is the first Scream flick without impresario Wes Craven, and writer Kevin Williamson doesn’t take on a creative role (he’s a producer), but fortunately, it’s well-directed by Matt Bettinelli-Olpin and Tyler Gillett, the team who brought us the refreshing horror hit, 2019’s Ready or Not. The script, written by James Vanderbilt (Ready or Not) and Guy Busick (Castle Rock), leans into the franchise’s signature self-aware meta flair—perhaps a bit too much, but the Scream flicks never take things too seriously and the tradition continues here.

As any Scream fan knows, the opening sequence always features Ghostface phoning a teen who’s home alone, then segues into a game of cat-and-mouse, and ends with a bloody stabbing. This installment is no exception; it’s quite playful, suspenseful, and extremely gory. The franchise also has its de rigueur the-killer-explains-everything ending. This time, the assassin has a particularly kooky ax to grind (or knife to plunge, as the case may be)—and while some might find the reveal and reasoning to be a bit of an eyeroll, I found it fun.

Franchise faves Gayle Weathers (Courteney Cox), Dwight “Dewey” Riley (David Arquette), Sheriff Deputy Judy Hicks (Marley Shelton), and Sidney Prescott (Neve Campbell) are back, and—unlike Jamie Lee Curtis in Halloween Kills—are not just thrown into obligatory roles. However, in keeping with Scream’s sensibilities, it is a young person’s fight to the death and the junior cast are as good as their predecessors. The main focus is on a pair of estranged sisters, Tara and Sam Carpenter (Jenna Ortega, and Melissa Berrera), who come together to fight the immortal Ghostface killer. Unlike Jason Voorhees or Michael Myers, Ghostface is a persona who remains active via different people donning his costume throughout the years, so, as the tagline implies, it could be anyone.

While Scream doesn’t skimp on the red liquid, the killings are not particularly chilling—in spite of how graphic they are (a blade through the neck is less cringe-inducing and more, like, “Wow, that’s a good effect!” type of thing). Ghostface is probably the least sadistic character in the canon of cinematic slashers, but he (or she) certainly is relentless, which makes for some exciting chase scenes. There are great fake-outs, too; one of which becomes a running joke throughout an extended scene which is brilliantly played out by Dylan Minnette, who portrays Sheriff Deputy Hicks’s son. It’s also fun to see Mikey Madison, who was so fired up as Manson Family girl Sadie in Once Upon a Time…in Hollywood, playing Amber, a frenzied horror film fan.

In closing, I had a good time with Scream. If you like the franchise, you’ll like this entry—it pokes fun at the films and fandom, but never in a superior way, leaving room for light laughs and a few deep cuts.