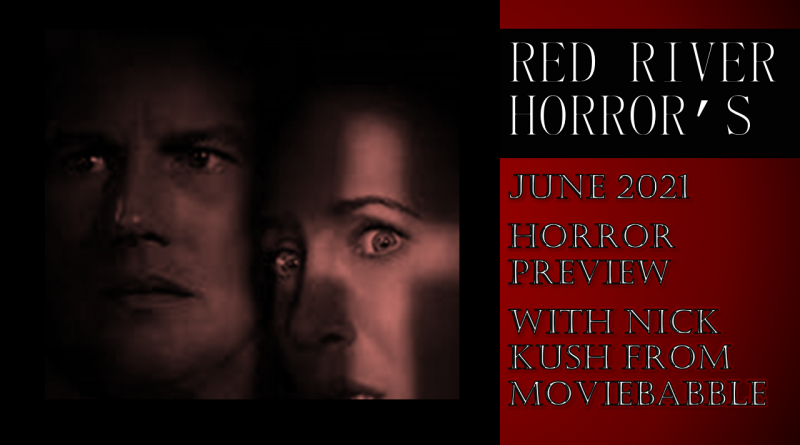 Don’t look now, but movies might be back! After a highly encouraging Memorial Day Weekend at the box office led by A Quiet Place: Part II and Cruella, there’s a palpable sense of excitement for moviegoing on a grand scale that we haven’t felt in well over a year. Now that we’re officially in the summer movie season and many high-profile films are on the way, it’s hard not to feel a little giddy about the state of the industry.

As the calendar rolls over to June, let’s take a look at what horror movies might keep people buzzing:

The most prominent horror franchise around continues to expand with The Conjuring: The Devil Made Me Do It, the eighth film in the series and the third Conjuring film. We team back up with Patrick Wilson and Vera Farmiga as Ed and Lorraine Warren as they become entangled with a court case in which the defense claims demonic possession as the cause of the crime.

Like the two Conjuring movies to come before it, The Devil Made Me Do It is loosely based on true events. (I can’t stress “loosely” enough.) Namely, the trial of Arne Cheyenne Johnson, which gained much media attention at the time and is also referred to as “The Devil Made Me Do It” case, hence the title. The film has received far more middling reviews than the previous two installments, but you can be sure this will keep the good vibes going at the box office.

The Conjuring: The Devil Made Me Do It will be available in theaters and on HBO Max on June 4th.

Perhaps the most surprising film development of the year is that we’re getting a new film from George A. Romero entitled The Amusement Park, four years after his death. Well, “new” is perhaps a slight stretch — the film was shot in between work on Night of the Living Dead and Dawn of the Dead in 1973 — but the film never saw the light of day because The Lutheran Society (the original financier of the project) refused to release the film. They initially commissioned the project as an educational film about elder abuse and ageism, but Romero created something far more disturbing instead. The Amusement Park was put on the shelf and eventually lost…until now!

Not since Orson Welles’ The Other Side of the Wind have we seen such a film discovery event. Hopefully, the end result is worth all the work, but I’m just happy The Amusement Park exists in some form.

The Amusement Park will be available on Shudder on June 8th.

Censor looks back on the video nasty era in the UK, a time when grisly, scuzzy exploitation films on VHS were a hot-button topic among regulators, the press, religious organizations, and regular civilians alike. Naturally, Censor focuses on a film censor named Enid (Niamh Algar) during the period, who spends her days watching horror films and marking where extra edits are needed so films can pass their inspections. That is, until one day she watches a film that seems oddly familiar to her. It’s at that point that she sees an actress that looks almost identical to her missing sister.

From there, Enid embarks on a quest to get to the bottom of this video nasty and its relationship to her past. I had the pleasure of seeing Censor at this year’s Sundance Film Festival, and the film only gets crazier from there. Reality and fiction start to blend together, and the grungey, dirty aesthetic from the video nasty era begins to infect her real life. The film’s presentation might be a turn-off to some, but this is definitely a one-of-a-kind horror movie.

Censor will be available in limited theaters on June 11th followed by a VOD release on June 18th.

Written by John Lee and Ilana Glazer, False Positive is a modern spin on Rosemary’s Baby. Lucy and Adrian (Glazer and Justin Theroux) visit Dr. Hindle, a fertility doctor (played by Pierce Brosnan) who helps them conceive after months of bad luck. Although initially happy, Lucy begins to wonder about Hindle and begins to suspect something far more sinister is at play.

It’s worth noting this is Glazer’s first feature writing credit as she looks to branch out post-Broad City. With A24 backing the film’s production, we might be on the verge of seeing Glazer in an entirely different light similar to Jordan Peele after Key and Peele.

False Positive will be available on Hulu on June 25th.

Anything for Jackson – June 15th (VOD and DVD) | MovieBabble Review