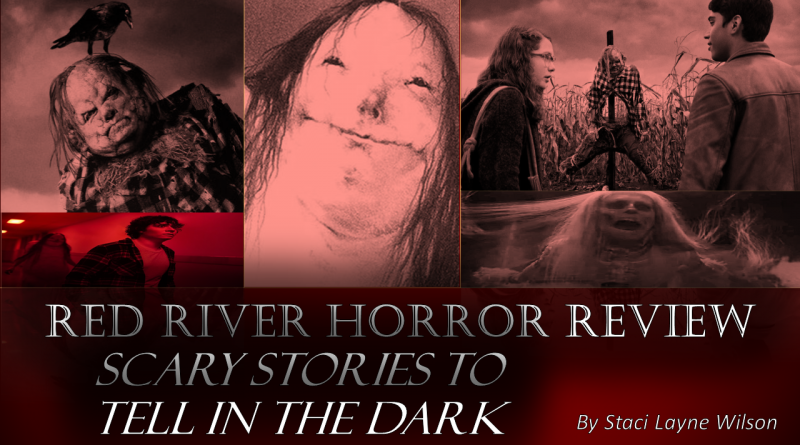 Scary stories for younger readers have always been around – from the child-baking witch in Hansel and Gretel to the Nancy Drew mystery series – but they really started to come into their own the 1980s and 90s. The 1960s and 70s were the domain of serious adult horror novels like Rosemary’s Baby, The Exorcist, Carrie, The Other, and The Omen. Once the “Me Generation” started having children, kids – perhaps for the first time on a grand scale – became thought of as consumers of entertainment with minds of their own to pick and choose. What’s more, parents condoned these books more than ever. Some of the most popular amongst baby-Goths were the Goosebumps series and Point Horror. But if you were an especially arty, intellectual kid then your page-turner of choice was probably Scary Stories to Tell in the Dark.

Written by Alvin Schwartz and illustrated by Stephen Gammell, the collective tomes caught and held the attention of filmmaker Guillermo del Toro, who has been working for years to bring these imaginative words and images to the screen in a live-action feature. del Toro finally found the right mix, thanks in no small part to director André Øvredal, who made his mark a few years back with a dark horror comedy called Troll Hunter. His follow-up film, The Autopsy of Jane Doe, sealed the deal in the minds of many horror fans who couldn’t wait to see what he’d do next. Unfortunately, as a team del Toro and Øvredal almost, but don’t quite, cancel each other out. You can definitely see del Toro’s dreamscape sensibilities, and you can hear Øvredal’s penchant for loud jump-scares. What’s missing is a distinct voice.

Set in the fall of 1968 – mixing Halloween night and Richard Nixon’s election… yikes! – Scary Stories to Tell in the Dark follows a group of misfit teens who come across a long-lost magical journal once owned by the (dead) local legend, Sarah Bellows (Kathleen Pollard). All images of scary Sarah were erased from family portraits and she was never let out of her basement dungeon, because, rumor had it, she was horribly disfigured. Townspeople whispered that she was responsible for poisoning area children. So Sarah was banished to the basement of her creepy ancestral home, where she started writing macabre tales in her little book of horrors. Using a quill pen filled with the blood of her victims, the stories became timeless but not harmless. In the end, she hanged herself with her own hair but her malevolent spirit lived on to ensure that anyone who read her tales of terror would be erased.

Each teen fills a prototype quota: Stella (Zoe Margaret Colletti) is a horror fanatic who reads monster mags “from cover to cover”, Auggie (Gabriel Rush) is a doubter of the supernatural, Chuck (Austin Zajur) is a joyful prankster, and Ramon (Michael Garza) is the wild card. Tommy (Austin Abrams) is a bully, and he’s dating Chuck’s big sister, Ruth (Natalie Ganzhorn).

Attempts to invoke the politics of its era, clearly meaning to mirror our own current administration, unspool with little impact and no consequence. Ramon is harassed for being Hispanic, but ultimately it doesn’t further the plot. del Toro wrote this script with four other screenwriters, which means the point of view feels diluted. And at two hours, the movie is a tad too long.

Having said that, I did mostly enjoy Scary Stories to Tell in the Dark. It seamlessly blends multiple standalone stories into one film, making for an interesting narrative/anthology hybrid. The movie is rated PG-13, but it really pushes the envelope in terms of language and moments of horror (sans gore, of course).

Overall, Scary Stories to Tell in the Dark is a solid young person’s horror film that delivers what it promises. The creatures are unique and designed with care, the legend and mystery-that-needs-to-be-solved is suitably spooky, while the moments of dread and suspense are well-presented. (I also enjoyed the original Donovan song “Season of the Witch” in the beginning, bookended with a new cover by Lana del Rey over the end credits.)