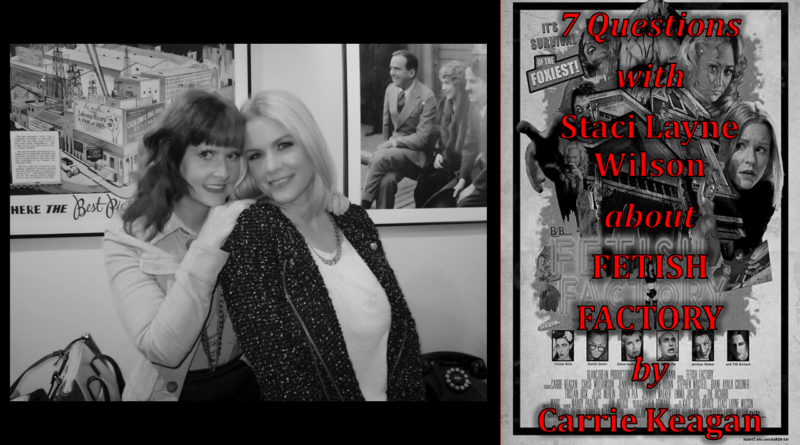 Staci Layne Wilson, the writer and director of Fetish Factory—a new zom-com now on Amazon Prime—and Carrie Keagan, star of the film, have known each other for years, having first met in 2006 when they were both entertainment reporters and movie reviewers. They both continue to cover the film biz as journalists, but now they prefer to be part of the action and spend more of their time on the creative side. Fetish Factory is Staci’s first feature as a director; Carrie has acted in quite a few genre films, and she will be directing her first horror short before the end of this year.

Rather than resorting to the routine Q&A, we at Red River Horror thought it would be fun to have Carrie ask Staci some questions about making Fetish Factory.

Carrie: “Why is the movie called Fetish Factory?”

Staci: “When actress-producer-uberwoman Jennifer Blanc-Beihn and highly imaginative executive producer Lony Ruhmann approached me about writing and directing a saucy suspenser based on one of Lony’s loglines – ‘pinup girls vs. zombies’ – I said yes. I didn’t say yes to the original title, though: Sleaze Factory. Womp, womp. So, since I added some characters with (very mild) fetishes, and I adore alliteration, Fetish Factory seemed like the perfect title. Once the movie was shot and sold, the distributor noticed that the word ‘fetish’ brought up all kinds of alarming things in internet searches. So, they changed the title of the movie to Cabaret of the Dead. I loved it! Even *more* perfect. We changed the poster, IMDb, alerted the media, and then… the movie debuted on Amazon Prime as Fetish Factory. I was surprised! I still like the title, though.”

Carrie: “As a first-time director, what were some the easiest, and hardest, things you came up against?”

Staci: “It was my first feature, but not the first thing I directed. Fortunately, I had completed several short films. But it was my first time working with such a large cast, and an actual crew! Never had a gaffer before! The easiest thing was casting—I must say, I was thrilled to get you in the role of my Bettie Page lookalike. Although your hair is naturally blonde and I had never seen you as a brunette, you look the part 100%.

Being that Fetish Factory is a low budget film, we had to lose certain aspects of the original idea. I had a lot of characters written into the script, but had to kill a couple of darlings because of actors’ salaries (you guys just INSIST on being paid!). In the end, we somehow gained even more than we lost – more go-go, more girls, more glam, and more ghastly ghouls than I’d originally envisioned. Win/win!

That’s not to say we didn’t have our obstacles. We had a lead actor drop out the day before filming to pursue an audition in a TV commercial, but luckily Jen had a spare (pun intended: this new actor was in the fabulous existential horror film Rubber, which is about a marauding, murderous tire) and he not only met, but surpassed, all expectations. His name is Daniel Quinn, and he was absolutely marvelous. (Sadly, he passed away a few months after we wrapped, and so the movie is dedicated to Daniel’s memory.)”

Carrie: “How did you choose which sex symbols of yesteryear would be featured in Fetish Factory?”

Staci: “Bettie Page was a shoo-in. I love her!  One of Lony’s edicts in terms of my script was that the women have to love what they’re doing. Sure, they dance onstage and the guys ogle them backstage, but – the ladies are not oppressed and they are not merely bouncing cheesecake. They’re smart and funny, and totally in control of those guys—they’ve got them wrapped around their little fingers and the fellas lap it up. Win/win. Until the zombie apocalypse strikes! So, Bettie Page was a must-have, because she actually did enjoy being a pinup and fetish model. She never came out later, ala Linda Lovelace, to say the profession was not her choice. It was her choice, she was the mistress of her domain, and there is just something genuine about her smile in her photos that makes her likable. (Not so much in her mugshot for when she tried to stab her landlord years after she retired, but that’s another story—we’ll save that for Fetish Factory II: The Revenge!)

The Jayne Mansfield lookalike is played by Jen, because she’s a real-life blonde-bombshell. I did a Rosie the Riveter / Roller Girl mashup because I had to combine two characters, but it works. Lastly, the Suzie Wong wannabe was just plain fun because who doesn’t love a good Cheongsam?”

Carrie: “What inspired you to combine sexy burlesque girls with rabid zombies?”

Staci: “That was Lony’s idea. Have you ever heard a parent say, ‘I’m not especially fond on children. …But I love my own’? That’s kind of how I feel about zombies now. They’re my least favorite genre monster, so before I wrote the screenplay I suggested having a Satanic cult invading the burlesque show instead. I also thought it would be a lot easier in terms of the makeup effects, since we were on a tight budget and even tighter schedule. But Lony is an ordained minister, and he nixed that idea. I’m glad he did, because I absolutely cannot see the Fetish Factory being invaded by anything but our hilarious undead denizens!

There’s also a pinup connection in my real life: my mom was a cheesecake model in the 1960s. She modeled under the name Buni Bacon. So I’ve always been drawn to that era and that look. While other children were reading Little Golden Books, I was thumbing through Bachelor, Swank, and Man-To-Man!”

Carrie: “There are all kinds of zombies – fast, slow, rotten, fresh… yours seem to be a variation on all of these. How did you direct the actors?”

Staci: “At first, I thought it would be nifty and sly to keep their decay on the D-L and make them more sickly than slimy. But then I found out Jennifer had worked with F/X master Vincent Guastini and he was raring to create late-stage zombies for us. Between Vinnie and the very gifted beauty-and-beastly makeup artist Mayera Albeita and her counterpart Michelle Sfzaro, we have made a kickass monster movie replete with shambling undead even I can love.

When it comes to directing zombies, there’s not much to it: the actors just love being able to play make-believe, and so they come up with all kinds of great moves, looks, and ideas of their own. Jack Bennett, who got to be one of the few to don Vinnie’s ‘hero’ zombie makeup, noticed that there just happened to be a priest’s confessional booth outside the house where we shot (that place had everything! We barely had to dress the sets and all the furniture was there) so he came up to me and asked if he could be a man of the cloth.

It’s one of the wackiest and most memorable moments in the movie! My boyfriend, Aaron Kai, is in the movie as Kung-Fu zombie because he knows martial arts. That’s also one of those lucky things that’s unique to the situation and doesn’t follow the typical formula.

I did direct them in regard to their motivation. ‘Brrrraaaiiinnnns!’ Kidding, kind of. I did tell the actors who were in “fresh zombie” mode that they would move quicker and still have some of their wits about them. The ‘rotten zombies’ were more of the shambling variety and since their brains and eyes would be decayed, I asked them to seem clumsier.

A Sneak Peek of Fetish Factory

Carrie: “Now that the movie is out, what kind of feedback are you getting?”

Staci: “Bad reviews come with the territory in horror and especially in low-budget filmmaking. A lot of viewers judge the quick-n-dirty flicks on the same scale as they do a billion-dollar blockbuster. It’s not fair, but hey, who said life is fair? Just ask a zombie! Having said that, I’ve only seen a couple of slams so far. Our reviews and user comments have been overwhelmingly positive! It’s especially gratifying when watchers totally pick up what were putting down: pure entertainment. I love it when people say stuff like, ‘This is something Elvira would have played on Movie Macabre’ or ‘Total grindhouse throwback!’ Yep, those are our people. It also makes me happy when the actors are singled out for their performances. You know first-hand, Carrie, that we were running and gunning and didn’t have time for rehearsals or very many takes. That’s why casting the right people in the first place is so important.”

Carrie: “What’s coming up next for you in the horror genre?”

Staci: “I’m currently working on a five-book vampire romance/thriller series for Third Street Press, and I am super-Stoker… I mean, super-stoked about that. I started out writing horror novels in the early 2000s but my professional life took other turns. I got back to writing books last year and released a short-story collection called City of Devils. One thing led to another and now I’m back between the pages. The tentative title for the series is Immortal Confessions, and book one is due out in early 2019.

Also… drum-roll, please… I’m set to direct another horror feature! It’s called Dead Slate, and it’s written by Kerry Fleming. I happened to catch a Halloween night premiere in Hollywood of a movie he cowrote and produced and Tom Holland (Child’s Play) directed, called Rock Paper Dead. I was especially impressed when I met Kerry because he did something really interesting in combining a few genres (no spoilers here!) and I liked that he took his writing and horror movies so seriously that he purposely sought out a true O.G. to collaborate with—Victor Miller, who wrote the very first Friday the 13th. Some months after we met, Kerry sent me the script for Dead Slate to see what I thought, and I loved it. It’s very clever and it’s a “movie within a movie” which is actually one of my favorite subgenres. Most people will probably think Scream 2 when I say that, but one of my favorites is Day For Night. (Full disclosure: Dead Slate will be nothing like the François Truffaut classic.) I’m thrilled to have been selected for this fun flick—contrary to Jason Blum quotes in the news, there *are* a lot of talented female film directors who love horror—and I can’t wait to dive into all the blood and gore.”