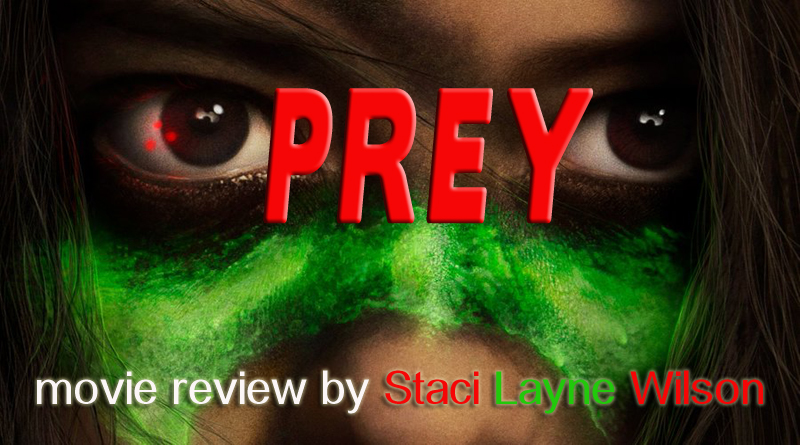 “If it bleeds, we can kill it.” Every horror fan remembers that line from the first Predator film—which is actually more of an action and sci-fi hybrid—but that was a long time ago and no sequel has ever been much of a match to the 1987 gun show. Installment after installment, fans of the creepy camo killer have been let down. (See our review of 2018’s The Predator.)

Prey is the umpteenth follow-up but the first one to shake things up in all the right ways. Director Dan Trachtenberg takes the story in a different direction on the surface but he is smart enough to keep true to the roots of the alien predator’s scare factor—namely that it is an apex hunter who seeks people-shaped prey. Sounds simple, right? But most of the canon is over-complicated with too many characters, vague quests, and one-upmanship in the gore department. Trachtenberg strips away all the techie bells and whistles by setting the story in the distant past and honing in on a battle of wits between the alien and the earthling.

Set in 1700s Comanche territory, Prey centers on a plucky young woman, Naru (Amber Midthunder), who wants to prove that she can be just as fierce and skilled a warrior as her male counterparts. When danger threatens her tribe, she gets her chance and sets out across the Great Northern Plains, along with a small party of other fledgling warriors, to protect her people. The quarry she stalks and ultimately confronts turns out to be the exceedingly evolved alien predator who can not only disappear at will via organic camouflage but also has a technically advanced arsenal that makes a mockery of Naru’s arrows and tomahawk. But as you can guess, it’s brains that win the game. Part of why Prey works is because its protagonist isn’t a cigar-chomping, muscle-bound, machine-gun-toting badass—which was perfect in the 80s but is passe now—Naru is a perceptive, calculating brave who kills only because she has to.

Much like Trachtenberg’s sci-fi nailbiter, 10 Cloverfield Lane, Prey takes its time to build the suspense. In addition to deliberate direction, there’s cinematography worthy of a nature documentary by Jeff Cutter, and moody music that’s perfect to die by courtesy of composer Sarah Schachner. While Prey was shot in English, French, and Comanche, its Native American actors re-recorded their lines in post-production so that the whole movie can be played in Comanche—a first for a major studio film. Everything fits together well in this Predator puzzle, making for a satisfying quasi origin story that should please most fans.

As the plot unfolds, we get to know and care about Naru and her family—and even fall in love with her loyal pooch, Sarii (Coco). She hones her stalking skills simply to show her mettle but, of course, these freshly-honed talents come into play as the stakes rise. We also follow the Predator (Dane DiLiegro), as he explores his new landscape and tests his killing skills on small animals before moving on to bigger beasts like bears and, inevitably, humans. Things come to a head in a bloody battle royale set on a moonlit night in the camp of a group of French fur trappers who’ve taken Naru and her brother, Taabe (Datoka Beavers), prisoner. Here we witness the full brunt of the Predator’s ruthless fury and thrill to a sanguineous showdown.

While there is no substitute for the shock and awe of the original Predator, Prey is the next best thing.