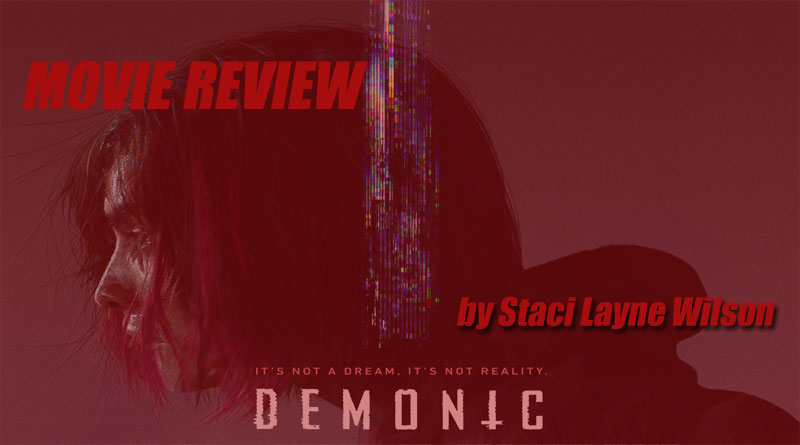 A horror-thriller with a high-tech twist, Demonic is written and directed by Neill Blomkamp and was inspired by low-tech, reality-based, found-footage horror flicks The Blair Witch Project and Paranormal Activity—even though it’s not low-tech or realistic, and it’s (thankfully) not found footage, one really can see those influences as Demonic unfolds.

The story is a little convoluted, but it’s not impossible to follow. When Carly Spenser (Carly Pope) learns that her estranged mother Angela (Nathalie Boltt) has fallen into a coma, she reluctantly agrees to take part in a cutting-edge therapy that will allow her to tap into Angela’s still-active brain and communicate with her. She really only wants to do this so she can tell her mom how much she hates her. This super-secret tech is overseen by physician Michael (Michael J. Rogers) and neuroscientist Daniel (Terry Chen), neither of whom are what they seem. When Carly enters Angela’s mindscape, which is like a VR simulation, she soon discovers that there was a powerful supernatural force that drove her mother to commit horrific acts of violence… and it’s still there. Carly gets out unscathed, but now that she knows her mother is not to blame for making her childhood a living hell, she is determined to rescue her from the clutches of the demon that’s keeping her captive in that coma.

Somehow, Carly brings the demon out of the simulation and into the real world. It plagues her with terrifying visions and threatens to kill not only her mom but her as well. Carly confides in her best friend Sam (Kandyse McClure) and her ex-boyfriend Martin (Chris William Martin), which only puts them in the crosshairs of the demon.

Speaking of crosshairs, it turns out that Michael and Daniel are also black-ops priests who are part of a Vatican-employed army that fights evil using assault rifles, swords, crossbows, crucifixes, Bibles, and magical artifacts. Sadly, this cool twist is left almost entirely in the periphery. Most of the film follows Carly on her personal quest. There are a lot of scenes that take place in the VR world, but in spite of the pioneering tech, I wasn’t all that impressed by the visuals. The immersive simulation horror film uses a patent-pending new method of using volumetric capture (a three-dimensional video technology that turns actors into geometric objects). To be honest, the scariest, most unsettling scene in the entire film comes somewhere in the middle and it’s 100% practical, using a contortionist stunt actor.

Blomkamp is known for his sci-fi movies—District 9, Elysium, and Chappie—none of which I have liked all that much. As far as I’m concerned, Demonic is his best effort to date; maybe he should stick with horror. (Or take long breaks; Demonic comes after a six-year hiatus.)

The demon design is pretty good; it’s kind of a cross between a Medieval plague doctor and a banshee. As I mentioned, the story is a bit convoluted and motivations are murky—but I think the demon is more electronic than supernatural. While the nemesis looks cool, there’s no backstory on it, it does not speak or communicate in any way, and it doesn’t have any personality characteristics.

All in all, Demonic could have been better, but it does move along at a quick pace and keeps you interested enough to want to see how it ends. Thanks to its atypical concept and visually intriguing demon design, it has enough to set it apart from most possession horror films which makes it worth a look.