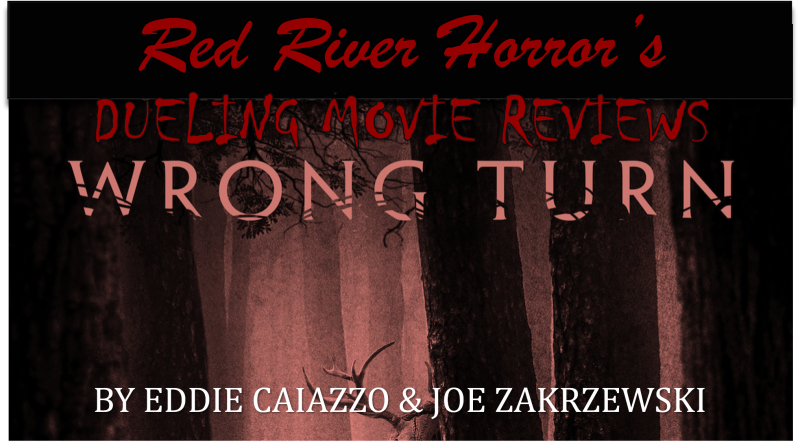 The Wrong Turn reboot/remake is out now and Joe and I wanted to review it on the podcast. We both watched the film separately, and will be talking about it together for the first time on the pod. As part of the fun, both of us wrote reviews and assigned the new flick a RRH boat rating. Welcome to the first Red River Horror Dueling Movie Review. Grab your bow and arrow and let’s begin!

Way back in 2003, Eliza Dushku and some other pretty young folks ventured off the designated path on The Appalachian Trail in the original Wrong Turn. Backwoods cannibals had their way with some of the youngins and found some brutal ways to murder the adventurers. This largely forgettable slasher – which was a box office success – somehow spawned five direct-to-video sequels. Amazingly, Wrong Turn 6: Last Resort released in 2014 and served as a reboot.

The brutality fans of the series have come to expect is alive-and-well in this latest version. The tone is more serious, the story is a bit deeper than ever before. This Wrong Turn‘s story follows a dad (Matthew Modine) and the search for his missing daughter Jen (Charlotte Vega). Jen and her diverse band of friends hike into the woods and off the beaten path to take in some sights they wouldn’t otherwise see on the trail. As the crew ventures further up the mountain, a series of booby traps await. Surprisingly, the film does not go in a direction of the cast getting picked off one-by-one by the “cannibals” on the mountain. Instead, only one person in the group is killed by a booby trap. The script gets flipped fairly quickly, though, as one of the mountain dwellers is killed in-turn for trapping another member of the group.

That’s when our diverse group of young folks that go missing meet “The Foundation.”

Alan B. McElroy, who wrote Halloween 4 and the original Wrong Turn, provides a surprisingly fresh take on the whole “get off our land or else” narrative. What should have been a straight-forward group of youngsters getting hacked up in the woods turned into a smart, violent tale with many layers. Mike P. Nelson directs a bright cast that pulls off some genuinely terrifying and emotional moments.

Wrong Turn 2021 does so many things right and is a welcome and refreshing horror film. With a runtime of one-hour, 49-minutes however (1:49), the film should’ve ended a minimum of four times. The runtime is a distraction because there’s a twist, then a fake ending, then a drawn-out ending that may or may not be needed depending on your level of satisfaction up to that point.

That is how you do a reboot! Imagine seeing a movie with potential and envisioning how it could be better. That is what writer Alan B. McElroy and director Mike P. Nelson capture with this re-imagining of the Wrong Turn franchise. The lost in the woods formula is done by the book, including the mandatory creepy townspeople, unlawful sheriff, etc.

Contrary to the typical lost in the woods theme, this film provides a greater depth than its gore-fest predecessors. We get a more detailed story with some scenes that are straight nightmare fuel. It is a battle of wit and will to overcome the potential terrors deep within the woods. McElroy, who is also the writer of the original Wrong Turn, crafts a unique re-visioning for the film franchise with a fresh feel. I would highly recommend this flick for those looking for a fun watch. Also, if people tell you not to go in those woods, do not go in those woods.

After you’ve watched the film, listen to Joe and Eddie talk about it in a spoiler-filled podcast! You can listen below on YouTube, or subscribe on your favorite podcast provider: Apple, Audible, Google, Podbean, Spotify and TuneIn.