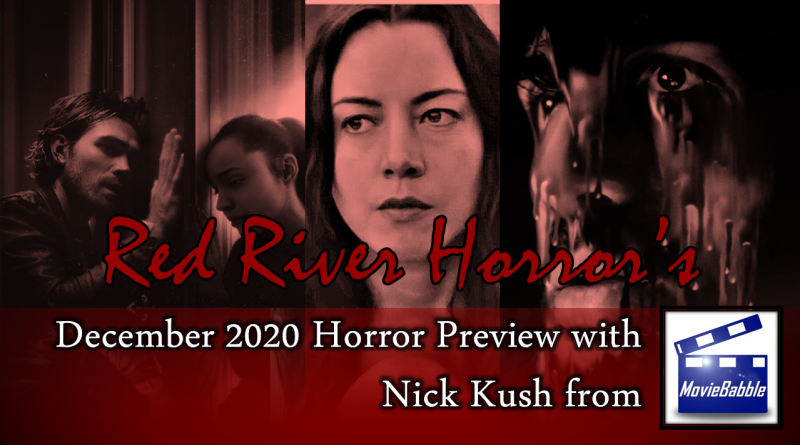 It’s hard to imagine we’re already nearing the end of 2020. (Then again, time has lost all meaning since mid-March.) Aside from a few notable releases such as The Invisible Man, Color Out of Space, and the criminally underrated Gretel and Hansel, many high-profile horror productions have punted to 2021, leaving 2020 as the year of independent horror. But if you ask me, given everything that happened this year, this is a bit of a silver lining.

Many smaller and downright strange horror movies have taken the spotlight in general film conversation this year, from the overwhelmingly depressing Relic to the wonderfully creative Bad Hair, and everything in between. For many horror fans, a landscape without the typical blockbuster fare has led to plenty of exploration and discovery. And as the calendar changes to December, there are plenty of new opportunities to find some smaller horror gems.

A standout at the 2020 Sundance Film Festival, Black Bear appears to be an odd but fascinating mix of comedy, drama, and thrills, focusing on the intricacies of the creative process by following writer/director Allison (Aubrey Plaza) as she visits an artist retreat of sorts ran by Gabe and Blair (Christopher Abbott and Sarah Gadon). Drinks are had, battle lines are drawn, and an odd, ever-shifting conflict emerges between the three.

Saying Black Bear is a straight-up thriller would definitely be misleading, so go in expecting the unexpected, and you’ll be rewarded with what many are calling knockout performances from Plaza, Abbott, and Gadon.

Black Bear will be available on VOD on December 4th.

Minor Premise is a great piece of hard science fiction filmmaking, similar to the likes of Primer mixed with the mind-splitting trauma of Memento. Ethan (Sathya Sridharan) hopes to create a machine that ties memories to emotions, and then connect those emotions back to different parts of the brain. Such a link will allow him to enhance or reduce different sections of his mind.

Running up against a deadline, Ethan tests the machine on himself, which accidentally splits his consciousness into ten segments, most of which are single emotions. There’s the version of Ethan that is all rage, one that is all his anxieties, and so on. And they all take over his brain for exactly six minutes of every hour.

Naturally, before his mind rips itself to shreds, Ethan must work to put the machine back together.

Minor Premise will be available on VOD on December 4th.

Goop-master and horror icon Stuart Gordon sadly passed away earlier this year, but his legacy will certainly live on through his many notable films, such as Re-Animator and From Beyond. In fact, we’ll receive an update of his cult-favorite Castle Freak this December, thanks in large part to Fangoria.

What should we expect from the remake? Well, similar to Black Bear, perhaps it makes the most sense to go in expecting the unexpected, as those tied to the film claim it is less of a remake and more of a bold reimagining. Director Tate Steinsiek has even worked with some of the best special effects artists in the business, including the great Tom Savini — his take on Castle Freak might just pay off.

And for those who love H.P. Lovecraft stories, get ready: this Castle Freak might be the start of an extended Lovecraftian universe.

Castle Freak will be available on VOD on December 4th.

Songbird went into pre-production on March 13th when writers Adam Mason and Simon Boyes began exchanging ideas on a COVID-19 movie and plotting out a script in the wake of the U.S. shutdown. Bay and a group of producers signed on later in May, and principal production started on July 8th. It’s certainly an impressive feat to wrap shooting and post-production at such a quick rate, but for a movie wherein those infected with a mutated virus are taken to concentration camps and KJ Apa’s character is described as a “motorbike courier”, do we necessarily think it’ll be a good representation (or fun extension) of the times we live in? I’m not so sure.

Songbird will be available on PVOD on December 11th.

Anything for Jackson – December 3rd (Shudder)

The Dark and the Wicked – December 15th (DVD)