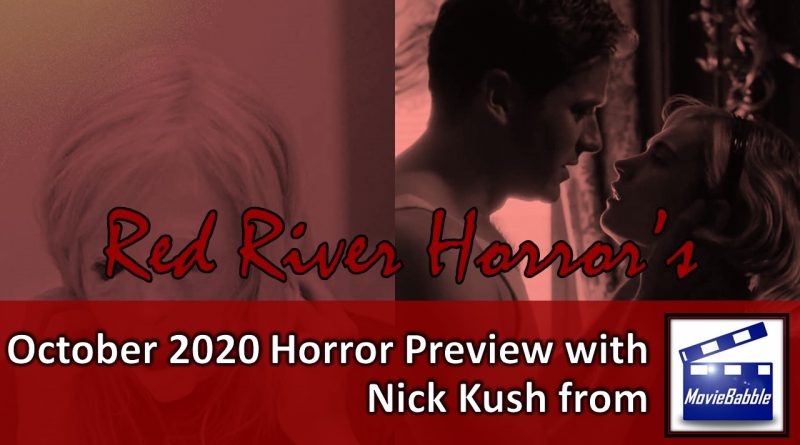 ‘Tis the season for all things spooky! A time when the best thing to do is sit on the couch, grab a loved one (or someone who scares easily, depending on how mean you are), and watch something so terrifying that you won’t be able to sleep later that night.

Normally, I would be lamented the delay of many prominent horror films due to the pandemic, but while we may not be able to see noteworthy titles such as Halloween Kills and Nia DaCosta’s update of Candyman due to many of the release reshufflings occurring in the industry, October 2020 still has many horror films debuting, thanks in large part to a few different streaming services.

Let’s see what the month ahead has in store for us in the October 2020 horror preview:

When reflecting back on my 2020 Sundance experience, two movies stick out in my mind: One is Minari, a beautiful family drama about the immigrant experience, the other is Brandon Cronenberg’s Possessor, one of the more vile films of the last decade.

Cronenberg’s sophomore feature is an overwhelming sensory experience, filled with images that are equally stunning and royally twisted as it follows Tasya Vos (Andrea Riseborough), an assassin who uses brain implant technology to inhabit other people’s bodies to kill people without a trace. But when she enters Colin Tate’s (Christopher Abbott) body, she loses control, and each person’s consciousness struggles for dominance.

I’m glad to see the marketing material promoting the film as Possessor Uncut, as many studios would undoubtedly try to sensor the graphic imagery involved and edit it down to an R-rating. As constructed, Possessor is easily headed for an NC-17 rating, and removing any content would detract from the most singular movie experience of 2020. It’s pure, ghastly insanity, and you definitely don’t want to miss it.

Possessor is in limited theaters October 2nd, with a streaming release slated for November 6th.

I love a good horror anthology film, and The Mortuary Collection is certainly that. The collection of stories from director Ryan Spindell has a mean streak that punishes evildoers, and it’s consistently gruesome and fun.

The framing device is a woman named Sam (Caitlin Custer) hoping to take a position at a morgue as an assistant. The head of the morgue is none other the great Clancy Brown in ghoulish makeup as a Cryptkeeper-like figure. He regales Sam with stories of odd and nasty deaths to wonderful effect. One story involving Euphoria‘s Jacob Elordi is particularly strange…

The Mortuary Collection is available October 15th on Shudder.

Love conquers all, especially in Michael Matthew’s Love and Monsters, in which Joel (Dylan O’Brien) must traverse the country to find the girl he loves in the aftermath of an apocalyptic event that spews monsters onto the Earth and forces humanity underground.

The film most definitely skews towards being an action-comedy, but hey, hopefully there’s a few neat monsters for our hero to defeat!

Love and Monsters will be available October 16th on premium VOD.

Ben Wheatley’s Rebecca is perhaps the high-ceiling, low-floor movie to watch for in October. Simultaneously a remake of Alfred Hitchcock’s 1940 classic and an adaptation of Daphne du Maurier’s renowned novel, you would think remaking such an iconic Old Hollywood film would be a fool’s errand, but Wheatley is a great filmmaker, and the cast (featuring Armie Hammer, Lily James, and Kristin Scott Thomas) is very impressive. It’ll be interesting to see what spin Wheatley puts on this quasi-ghost story, or if we’ll merely be disappointed in the end.

Rebecca will be available October 21st on Netflix.

The Empty Man from Fox (or 20th Century Studios in a post-Disney-Fox merger world) starring James Badge Dale is scheduled to open on the 23rd, although we haven’t seen a single image or trailer from the film at the time of writing. Instead, this weekend, my focus will be on Justin Simien’s Bad Hair, a movie about a killer weave.

Yes, you read that correctly, and yes, a weave does in fact lurch around the screen and attack people. Although, Bad Hair works much better when it’s a psychodrama centered on Black identity than when it’s a schlocky B-movie. Still, you certainly won’t see another movie like it this year.

Bad Hair will be available October 23rd on Hulu.

Death of Me – October 2nd (Limited Theaters and VOD)

May the Devil Take You Too – October 29th (Shudder)