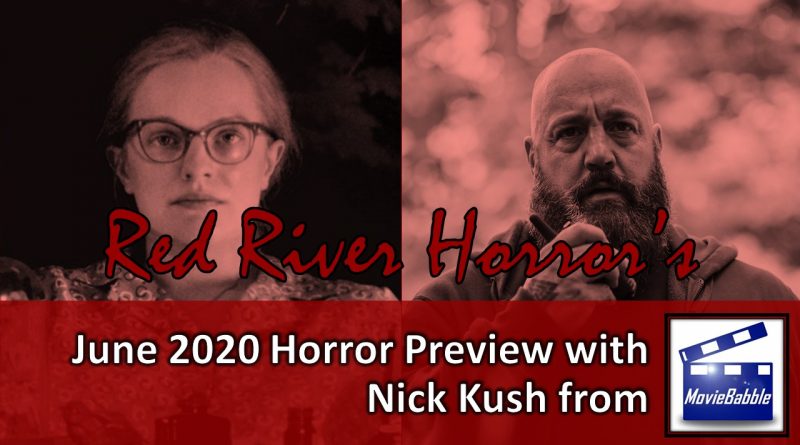 The “new normal” is already old hat as we enter what will be the fourth different month that many have been sheltering in place. Normally, we would be right in the middle of blockbuster season, with a Marvel movie already in the rear-view mirror with another major franchise movie coming down the pipeline.

But as we all know by now, imagining what could have been is a recipe for disaster; it’s important to look at what’s in front of us and make the best of it. That’s exactly how I feel about the horror landscape in June. Sure, there may not be that event horror/thriller film to headline the group of films, but there are plenty of fascinating possibilities, including a few indie films that could become iconic gems, or at the very least, odd fascinations. (Sometimes, those strange, perplexing experiments are precisely what you need. We all need a fun curio once in a while.)

Let’s take a look at the horror preview for June 2020:

Kevin James’ last live-action movie role was 2017’s Sandy Wexler. Since, he’s mostly stuck to television with his show Kevin Can Wait, although he still hasn’t appeared on any sort of screen since 2018, making his return in the grimey horror/thriller Becky as a merciless convict even more fascinating. His bearded, tattooed look is certainly a departure from Paul Blart!

In Becky, the titular girl (Lulu Wilson) and her father (Joel McHale) head to their lake house for a weekend getaway, only for a group of convicts led by James’ Dominick to ruin the entire trip and invade their home.

Who knows, this movie might be just as bad as Paul Blart: Mall Cop 2, but I’m always fascinated by actors who attempt to ditch the public’s perception of their work and try something a bit more radical. By taking this role, James is essentially trying to rewrite what the next decade of his career could look like, opening himself up to more than just the next offering from Happy Madison. Considering the alternative (i.e. just more pratfalls and fat jokes in lame comedies), I say go for it, Kevin James!

Josephine Decker’s biopic thriller Shirley played to almost complete acclaim at the Sundance Film Festival earlier this year. My only question is, can someone finally get Elisabeth Moss a nice, low-stakes rom-com to star in? The stress of all her woman-in-peril roles is starting to get to me!

As seen in the trailer, there’s an evil lurking under the surface of this biopic on renowned horror writer Shirley Jackson — other characters are claiming Shirley is going mad as a newlywed couple moves into her house and threatens her routine as she prepares her latest novella. Not to mention it damages her already rocky relationship with her husband played by Michael Stuhlbarg.

What has me most excited about this film is its apparent refusal to abide by any of the typical biopic cliches as it blends magical realism with history. If biopics have started to feel somewhat stale to you, Shirley will certainly be worthwhile when it hits Hulu on the 5th of the month.

Nikolaj Coster-Waldau has been searching for that signature role outside of his work as Jaime Lannister on Game of Thrones, and his next attempt is the mysterious Exit Plan, in which he takes a trip to the far-off Hotel Aurora to investigate a suicide. But, because this is a horror/thriller, once he arrives at the hotel, Coster-Waldau’s Max is forced to stay.

Like the many “detective goes to a faraway location to solve a mysterious crime only to become the subject of his or her own crime” movies that have come before, the reality in Exit Plan begins folding in on itself and Max questions his own existence. Hotel Aurora probably isn’t the best vacation spot.