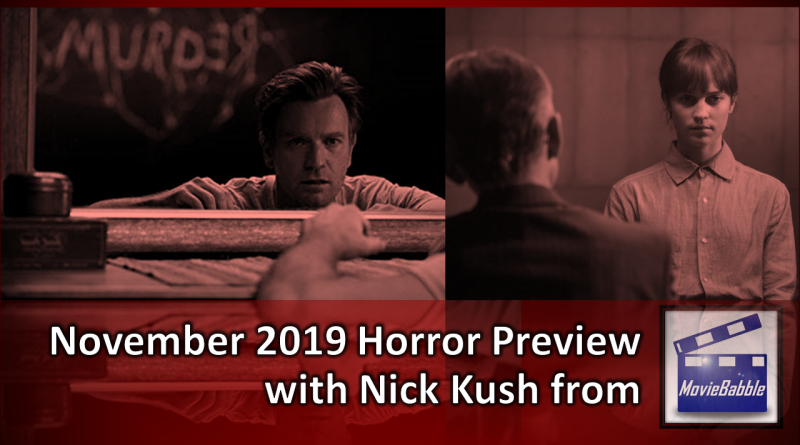 As we leave the month of October, I’m in the middle of a downer. I lamented in last month’s preview that October was noticeably quiet in the realm of horror, with the biggest release being Countdown — a movie about a killer app. Cue the losing horn from The Price is Right.

With Terminator: Dark Fate releasing on November 1st, you could understand why studios would stay away from opening a big-time movie at the end of October. Quite simply, they don’t want their movies to leave a ton of screens quickly to make room for a blockbuster, effectively giving the film a weekend or two to make most of its profits. For a movie with many resources put into it, that’s bad business.

Nevertheless, the consumers end up losing out in all of this, having to wait until November — after all the horror festivities have started to slow down — to see the big-ticket item of the season. That’s just…lame.

But thankfully it’s November, so I can stop complaining and get excited about what may be the most interesting horror release of the year.

Though some may bristle at the idea of a 153-minute horror movie, I find it pretty fascinating! We’re in an era where studios are beginning to invest more resources into horror, making more epic, sprawling tales instead of just movies about a creepy, creaky house. We saw it with IT Chapter Two back in September — although I wouldn’t exactly call that movie “good” — and now we’re getting it with another Stephen King adaptation in Doctor Sleep.

The sequel to the iconic The Shining follows Danny Torrance (Ewan McGregor) many years later. Danny reluctantly teams up with a young girl named Abra who shares his “shine” abilities to fight off the evil Rose the Hat (Rebecca Ferguson) and her followers “The True Knot.” This evil group feeds off of the shining power of innocent people in the quest for immortality.

That quick synopsis has quite a superhero-y vibe to it, doesn’t it? Or, at the very least, the skeleton for a very sensationalist, possibly silly movie. But Doctor Sleep has Mike Flanagan steering the ship, the director of The Haunting of Hill House, Gerald’s Game, Ouija: Origin of Evil, and many other acclaimed horror movies. If there’s a trend in his filmography, it’s that he likes to take possibly pulpy material and morph it into a contemplative, sometimes quiet character study that also happens to have very visceral moments interspersed throughout. You can probably expect the same from Doctor Sleep, which will trojan horse a story about regret and past trauma through a story about people with special powers fighting a death cult.

My guess is that Doctor Sleep will have many buzzing for weeks after its release, and studios also may have recognized that possibility, as the only other horror/thriller of note is Earthquake Bird. That is if you don’t think of Arctic Dogs as a horror movie as I do. (Admittedly, I find that movie scary for very different reasons.)

Earthquake Bird is less thriller than horror, circling around a woman (played by Riley Keough) who has gone missing after entangling herself in the relationship with a man and woman played by Naoki Kobayashi and Alicia Vikander.

And as you might expect, there’s a murder angle to the plot with Vikander’s character designated as the prime suspect. So strap in for a psychological thriller with many great talents involved…unless it lives up to the lackluster early reviews it has received thus far.