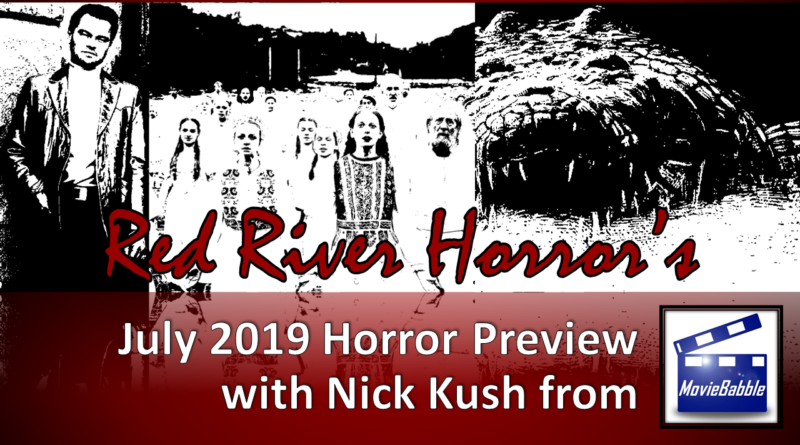 We’ve now passed the halfway point of the year. Before you know it, I’ll be writing for this very website discussing the hottest horror releases coming out around Halloween.

But until then, there’s more than enough horror and thriller films to satiate any kind of gorehound out there, starting with a few films in this month…and a little film from some guy named Quentin.

Let’s take a look at the July horror movie preview:

Ari Aster made a name for himself last year with his indie hit Hereditary, in which King Paimon immediately became a horror icon and Toni Collette was immediately robbed of her Oscar. Many pundits (including myself) marked Aster as the next big thing, and it seems that history is repeating itself in 2019 with the release of Midsommar.

From early screenings, many are calling Midsommar a modern masterpiece. One of the most notable pieces of acclaim comes from Aster’s contemporary Jordan Peele, who called the film “the most idyllic horror film of all time.” Well, that’s serious praise.

And it makes sense: Midsommar takes place in broad daylight at a summer festival in Sweden. Though it quickly takes a turn for the worse as pagan rituals begin. Naturally.

Florence Pugh is receiving similar praise to Toni Collette for her performance in the lead as well, so Midsommar may take the film world by storm. (Unless Spider-Man: Far From Home devours every bit of box office imagineable.)

Sometimes, all you need is to watch massive alligators bite everything in sight, and that’s exactly what Crawl will provide. From Alexandre Aja, the mind behind the mercilessly f’ed High Tension and The Hills Have Eyes (2008), Crawl finds a father and a daughter (Barry Pepper and Kaya Scodelario) trapped in their house during the hurricane of the century. And to make matters worse, HUGE alligators have invaded their space as the water level continues to rise in the house. If they don’t act, they’ll either be under water or eaten…or both.

In any scenario, Crawl will be schlocky, bloody chaos, and I can’t wait!

Is Once Upon a Time in Hollywood truly a thriller? Well, with the inclusion of Charles Manson and Sharon Tate into the narrative, there’s sure to be some kind of fireworks on display. Not to mention we know that Tarantino has a flair for the bloody with his love of grindhouse works of yesteryear. Either way, we have Leonardo DiCaprio, Brad Pitt, and Margot Robbie in the same movie. I’m in!