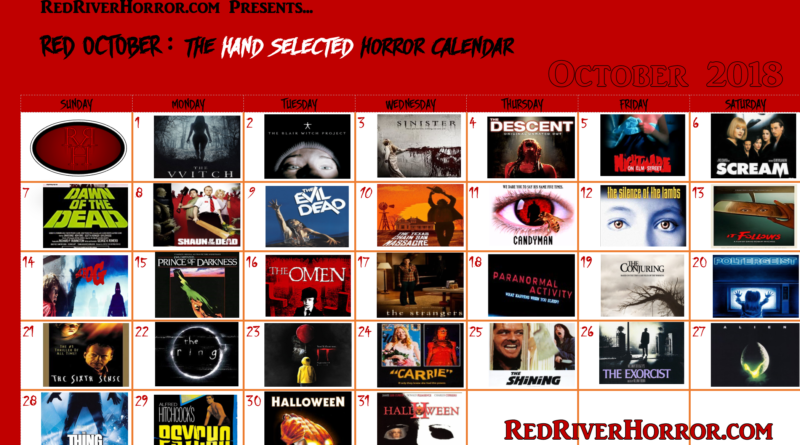 Sure, the sun will begin to disappear much sooner as October approaches.  But here at Red River Horror, we embrace the darkness.  Why?  So we can watch as many horror movies as we can in one day!

We do realize, though — in this busy world we live in — that you may only have time for one movie a day.  That’s why the folks here at Red River Horror have selected 31 films to watch each day in October.  Some of these films are among the best in cinema history; others are just favorites we think you’ll enjoy.

So How Were These Films Hand-Selected?

Seven Red River Horror contributors listed 31 of their personal favorite horror movies in no particular order.  With seven different perspectives, from the East Coast, through the Midwest, to the West Coast…there was bound to be some overlap.  If a movie was named, it received a vote.  The flicks with the most votes made it to the final list of 31.

So without further ado, let’s get to the calendar.  Did YOUR favorite(s) make the list?

Bet you thought John Carpenter’s Halloween was to be viewed on Halloween, huh?  In a break from tradition, our contributors thought it was only fitting to finish “The Night He Came Home” on the 31st.  If you didn’t know already, Halloween 2 is a continuation, picking up right where the 1978 masterpiece ends.  Lucky for us horror fans, this sequel actual delivers some genuine scares in the same style as its predecessor.  Although, we fully understand if you want to watch the original on the night it was intended be seen.  Besides, Blumhouse’s Halloween drops on October 19, and will ignore all of the sequels anyway.

Can you keep up with this calendar, and watch one film per day?  Do you agree with the final selections?  Would you watch them in a different order?  We’d love to hear from YOU in the comments below!