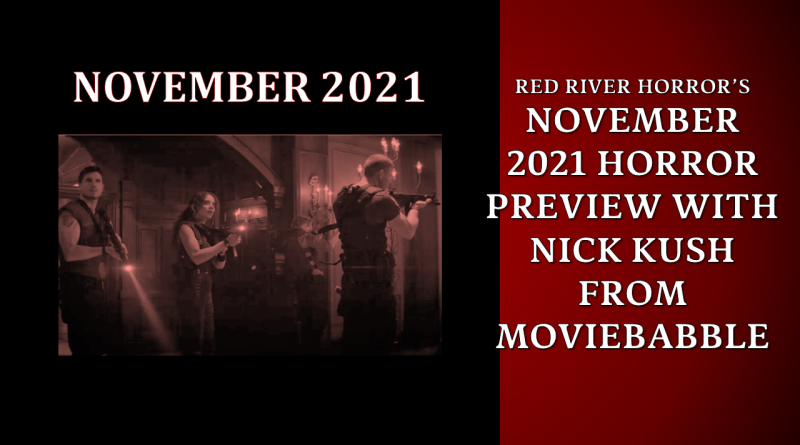 With the spooky season officially in the books and holiday season hype beginning to take shape, mainstream horror is taking a little reprieve. But I look at this momentary dip in output as an opportunity: there’s a greater possibility of a hidden gem capturing the spotlight.

Let’s take a look at what’s in store for us in the November 2021 horror preview:

In David Verbeek’s Dead and Beautiful, a group of insanely spoiled rich kids are really, really bored. So much so that they come together and take part in increasingly dangerous challenges to pass the time. One thing leads to another, and one source of “entertainment” turns them into vampires overnight.

And because their unimaginable wealth has led them to do just about everything, turning into bloodsucking monsters is the most interesting thing that has happened to all of them in quite some time. Do they finally have limitations on what they can accomplish? Or will they continue with the lives they had previously?

Dead and Beautiful will be available on Shudder on November 4th.

Film Twitter favorite Jim Cummings is back with his third feature, The Beta Test, this time with co-director and co-writer PJ McCabe. A married Hollywood exec (Cummings) receives a letter for an anonymous sexual encounter. Curious, he goes along with it, and his life spirals out of control from there. He begins to lose his grip on his work, which allows room for more of Cummings’ signature live-wire, manic energy. If you’re familiar with Cummings’ other works, you’ll know to brace yourself for the uncomfortable.

The Beta Test will be available on VOD on November 5th.

After approximately 47 Resident Evil films from Paul W.S. Anderson that you probably didn’t watch, the popular video game is getting a movie reboot in Resident Evil: Welcome to Raccoon City from 47 Meters Down director Johannes Roberts, which, considering the last Anderson-Jovovich installment came out back in 2017, is pretty surprising.

But despite how unpopular those films ended up being in the end, they still made a lot of money, so a reboot was inevitable. And to his credit, Roberts seems to be taking this film back to the core spirit of the games. So, prepare for far more blood, gore, and goop! (Hopefully.)

Resident Evil: Welcome to Raccoon City will be available in theaters on November 24th.