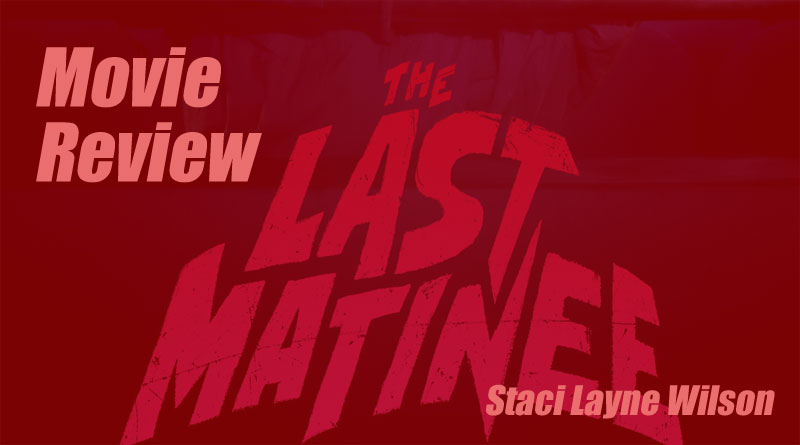 There’s something creepy, in a meta-macabre sort of way, when a filmmaker sets a horror movie inside a multiplex. Fade to Black, Demons, and Popcorn are just a few I can name—but when those flicks were released, we didn’t have video-on-demand. It was certainly more effective when you were actually in the location, watching these midnight massacres splatter across the big screen before your eyes while the smell of popcorn floated on stale air. Still, The Last Matinee does a good job of recreating the feeling of that dark, public (read: vulnerable) place, even for those of us who sat on our sofas to watch it.

Set during a gloomy, rainy evening in 1993, The Last Matinee’s site is a past its prime grindhouse where the last movie of the late-night bill is about to start—it’s a gruesome horror story, naturally. As the action unfolds, we also get to see the “movie within a movie.” There are only a few patrons inside, and these include a grumpy old man (Julio Troisi), an impressionable young boy (Franco Duran), a randy couple on their first date (Patricia Porzio, Emanuel Sobre), a lone, perturbed young lady (Daiana Carigi), and a trio of unruly teens (Julieta Spinelli, Vladimir Knazevs, Bruno Salvatti). In the projection booth is levelheaded Ana (Luciana Grasso), a study-focused college student who is filling in for her ailing father, and floating from place to place is the usher who can’t stop hitting on her, Mauricio (Pedro Duarte).

Uruguayan director Maxi Contenti reels out the horror slowly… too slowly, in my opinion, but those piercing moments between long, rather dull conversations between characters are, at least, quite effective. That is thanks in no small part to the visuals—the cinematography is rich and dreamy, while the blood and gore are realistic. Saturated primary colors and inky closeups of black leather gloves are nods to ‘70s and ‘80s Italian giallos, and while The Last Matinee is a retro slasher in regard to its kills (there’s a kiss that ends up a bit like the sex scene in Friday the 13th Part 2), the narrative lacks the goofy joy of those classics. There is, however, a bit of humor—too bad it’s the kind I don’t like (potty).

The trenchcoated killer wields a Fulci-esque M.O. –he’s known as “the Eye-Eater” and let’s just say you’ll never look at a jar of pickles the same way again. He arrives on the scene with a bag of tricks, and has had the foresight to lock everyone inside. When we finally do get a good gander at him, savvy horror viewers will see that he’s played by Ricardo Islas, a Uruguayan filmmaker who’s directed schlock horror dating back to the 1980s. In fact, it’s one of his more recent films, Frankenstein: Day of the Beast, that’s being projected to the doomed ticket-holders in The Last Matinee.

The actors do their best in underwritten roles, but “the Eye-Eater” is just a standard-issue creep who’s given no backstory and zero motivation—we don’t even know why he is targeting people inside a movie theater. The Last Matinee had potential and it is not a bad movie by any means, but it feels more like a stretched-out basic premise than a tight, fully-realized plot.