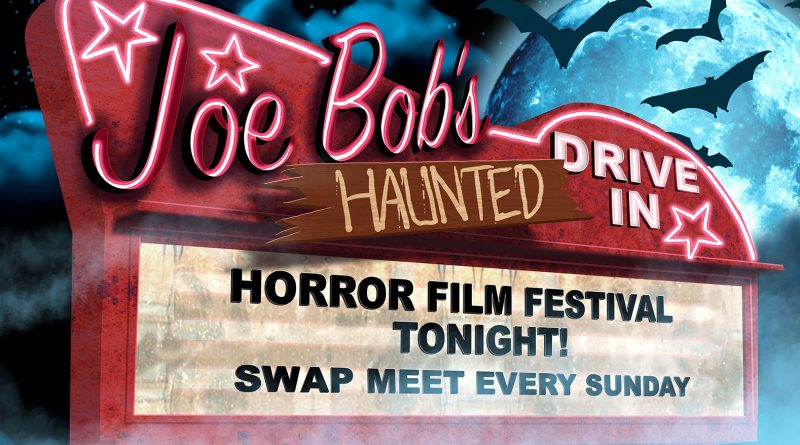 “SoCal is where my mind states, but it’s not my state of mind.” Why not? Because…I’m from Philly, silly! Though, 2020 has been the great equalizer, hasn’t it? CA, much like PA, is locked down. First-run horror films have been pushed back indefinitely. The worst part; you can’t even enjoy popcorn and a beverage inside a theater!

BUT, that doesn’t mean Halloween is cancelled.

While the Drive-In theater has struggled to survive throughout the last 25 years, it came back swinging hard in the time of COVID. For much of the pandemic, the Drive-In Theater has become the ONLY place to view films safely. That is why legendary horror host Joe Bob Briggs along with Black Vortex Cinema are offering horror fans a safe and immersive haunt and horror film festival at SoCal Drive-Ins this October.

If you think that woman in red looks strikingly like Felissa Rose, that’s because it is! The star of Sleepaway Camp was also seen earlier this year at the Mahoning Valley Drive-In watching flicks and greeting fans in Lehighton, PA. The lovely lady in blue is “Darcy the Mail Girl.” Both Rose and Darcy accompany Joe Bob through several nights of virtual MCing. The premium films introduced by our hosts are worth the price of admission.

“I’m excited to bring the best short horror films you submit to drive-ins, but I take no responsibility for any zombie attacks,” laughs Joe Bob. Set to take place over several nights, the eerie event will blend the nostalgia of watching a drive-in fright film festival with a live, interactive haunt.

Tickets for “Joe Bob’s Haunted Drive-In” start at $99 per car. For more information, including soon-to-be-announced screening dates, special event packages, sign up for the email list at www.JoeBobsHauntedDriveIn.com now.