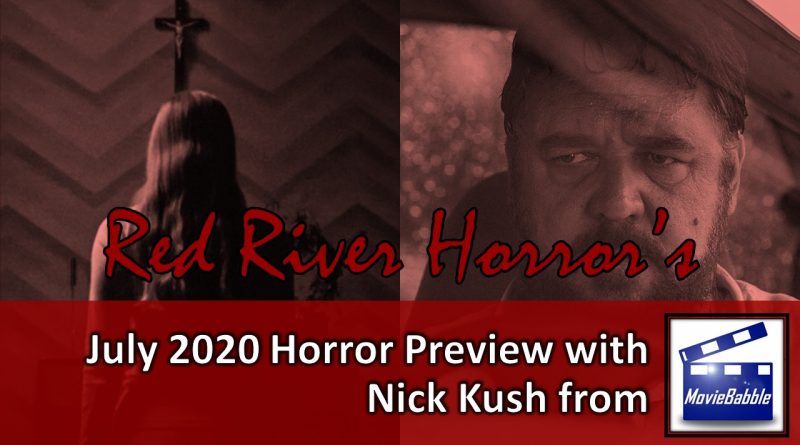 As we’ve learned over the last few months, everything can change in an instant. But at the time of writing, July’s horror slate is pretty stacked! We’ve seen distributors slowly adapt to changes in release platforms, and now with theater having announced their plans to reopen this month (we’ll see if this actually happens or not), more films are entering the marketplace. We have a breakout Sundance hit, an A24 movie, and a Russell Crowe movie all coming out! Is that normalcy I see creeping in?

Let’s dive into all these titles and more in the July 2020 horror preview:

Coming to VOD as well as drive-in theaters, Relic is one of the best-reviewed movies to come out of Sundance 2020, currently sitting at 100% on Rotten Tomatoes. Emily Mortimer stars as Kay, who, along with her daughter Sam (Bella Heathcote) travel to their family’s remote home to find the reportedly missing matriarch, Edna (Robyn Nevin). Strangely, Edna reappears on her own, but Kay and Sam quickly realize something came back with her. Something very sinister.

The evil force attaching itself to Edna is a wicked metaphor for dementia and aging. Hailed as patiently creepy and subtle, there’s probably a good chance Relic will stick with you long after you see it.

Initially shooting for an Easter weekend release date as a wink-wink, nudge-nudge gesture to its demonic elements, Saint Maud took over Tenet‘s original release date after it bolted to late July, and then mid-August where it currently is slated (for now). With rising COVID-19 cases around the United States, who knows if A24 will keep to this release date, but for now, let’s all prepare for what has the chance to become yet another horror favorite from the trendy independent studio.

A24 has made a highly successful trend of releasing horror movies in the spring and summer (The Witch, Hereditary, Midsommar, etc.) Saint Maud appears primed for similar results, boasting highly positive early buzz coming from first-time director Rose Glass. The film follows the titular Maud (Morfydd Clark), a very devout hospice nurse who becomes obsessed with saving her patient’s soul (Jennifer Ehle). Naturally, her desires take a turn towards the mad as her past sins threaten to ruin everything.

Another movie that showed at this year’s Sundance Film Festival, Amulet is another horror story about caring for the elderly (sensing a trend?) and depicts former soldier Tomaz (Alec Secareanu) who aids the lonely Magda (Carla Juri) in caring for her ailing mother. Though strangely, her mother stays on the top floor, never to be seen. Quickly, he realizes Magda may be forced to do her demonic bidding.

Directed by Dave Franco, The Rental sounds quite promising on paper as a horror/thriller/relationship drama hybrid. Much of this probably comes from Joe Swanberg’s input as co-writer, who has proved himself as a strong writer of interpersonal conflict. Nevertheless, it’ll be interesting to see how Franco handles his directorial debut. He certainly has quite the cast for it with Alison Brie, Dan Stevens, Toby Huss, and Sheila Vand all pitching in.

The premise is fairly straightforward: two couples grow weary that their rental house owner might be spying on them as sinister intentions and secrets come about. We’ll see if Franco’s up to the task!

Coming from the newly created Solstice Studios, Unhinged has unintentional comedy written all over it. Or, possibly a trashy thriller where Russell Crowe gets to ham it up as a man with serious road rage. Either way, I’m in!

The trailer, set to a hilarious remix of Nirvana’s “Heart-Shaped Box”, details Rachel (Caren Pistorious) having a run-in with a man (Russell Crowe) at a traffic light. Rachel honks and zooms away, but little does she know the man is…UNHINGED. A wild chase ensues, with plenty of car wrecks and action. This movie looks really dumb, but maybe it’s the best kind of dumb!

It will also be interesting tracking Solstice Studios, who is heavily marketing the movie as their first to hit theaters. I’ll go out on a limb and say now probably isn’t the best time to start a distribution company, but we’ll see if they turn the film into some long-term success.