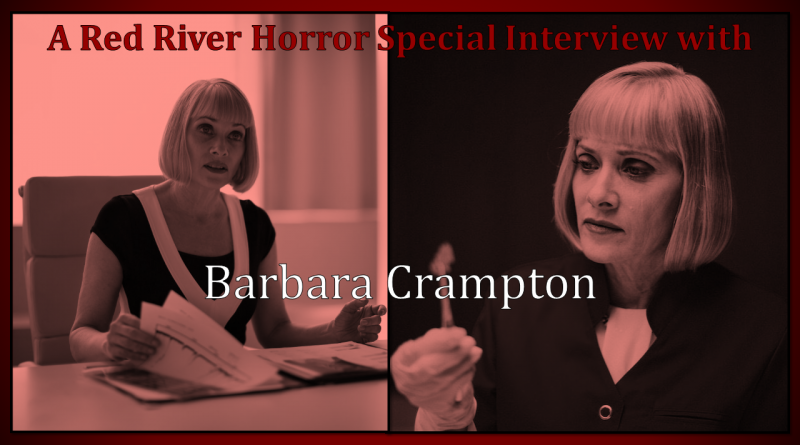 Many people were introduced to filmmaker and writer Richard Stanley via Netflix’s recent showing of the fascinating documentary, “Lost Soul: The Doomed Journey of Richard Stanley’s Island of Dr. Moreau.” But genre and grindhouse fans know him for his early works, Hardware and Dust Devil. He now has co-written (along with director Norbert Keil) a brand-new body horror, Replace, featuring horror legend Barbara Crampton as diabolical Dr. Rafaela Crober, and starring Rebecca Forsythe as Kira, her deteriorating patient.

We had the opportunity to talk with Crampton about her role in this very unusual and unforgettable film.

Red River: Replace is a very trippy, arty, incredibly visual film. Did that come across in the script, or did you know in advance it would look the way it does?

Barbara Crampton: Not at all. I didn’t visualize it the way it was shot, and in fact I was kind of shocked when I saw it. I was like, ‘Oh wow, this feels like a dream to me.’ It read much more like a clear way of telling a story, and that’s the way I interpreted in my mind. But I think they also played around with the editing a little bit, and so some of the scenes are in a different order than they were originally. So I had the feeling after I watched the movie that it was a much more of the mind, sort of psychological thriller in a way, and again I’ll use the word dreamy. It felt very dreamy to me and I think it fit perfectly with the lead character that Rebecca Forsythe played, in that she has a lot of questions in her mind, and she’s forgetful. She’s remembering things from the past and she doesn’t have quite a grip on what’s true and what’s in her mind, or what she’s imagining, so I think that it lent itself very well to telling a story.

RR: What genre is Replace?

BC: The interesting thing is, it’s evolved for me in terms of how I talk about it. Again, when I initially read the script, the surprise that you find out in the script came at the very, very end and I was shocked, I had no idea what that surprise was. Now that surprise is revealed a little earlier in the story, so I would say in its totality, after it being edited and put together and me seeing it a couple of times now, I would say that it’s psychological/ horror/thriller story.

BC: And yeah, hello, body horror. Love story, you’re right, there’s a lot going on. You’re never bored and I think a lot of movies are doing that now: you’re not getting straight horror, comedy, drama, anymore. It feels like we’re melding genres more than we ever have before, and I think that’s true of this story as well. First of all, to me, it feels like a thriller with elements of horror and a love story.

RR: I’m assuming that Richard Stanley as the screenwriter was a big draw for you?

BC: Well, of course. Initially, the call came from Kareem Hussein, who shot We Are Still Here, he was supposed to be the director of photography for the movie. It also came to my attention by way of [associate producer] Colin Geddes, and his wife Kat, who ran the Midnight Madness at TIFF for many years. The part of Dr. Crober was supposed to be played by a man, or it was written that way, and Colin was like, ‘Well why does it have to be a man? It could be a woman and I want to suggest Barbara.’ Kareem was in on that conversation, and Kareem and I are friends with Colin, but I’m really quite good friends with Kareem, having lived on a set with him for six weeks or so. So he called me and said, ‘We’re all in agreement that we’d like you to take a look at this part.’ Kareem is very good friends with Richard Stanley, and so they were kind of putting a team together behind the scenes. That’s frequently what we do in this independent genre arena, you don’t really hire a casting director you just sort of work with the people that you know, and your friends. We’re all close now through social media, connected through conventions and this and that, so it sort of evolved. When I knew that Colin was one of the co-producers, and I knew that Kareem was going to be working on it, and I knew that Richard Stanley was the co-writer… of course, I was completely excited. I hadn’t met Norbert [Kiel, co-writer/director], we conversed a little bit on email. I live in San Francisco but I happened to be in L.A. at a time when he was in L.A., so we set up a meeting and we got along like a house on fire. We liked one another.

I had read the script and I thought it was really cool and interesting. It feels Cronenberg’ian, as you eluded to, and all the players involved made me really excited to work on it. Norbert told me they had auditioned two hundred girls for this part, and finally found Rebecca. She’s the daughter of William Forsythe, and she’s so completely wonderful in the film. The apple doesn’t fall far from the tree, her pedigree is very high, so I knew all that. It’s a film I’m really proud to be a part of.

Replace is available now on DVD and VOD through all of the popular streaming outlets.