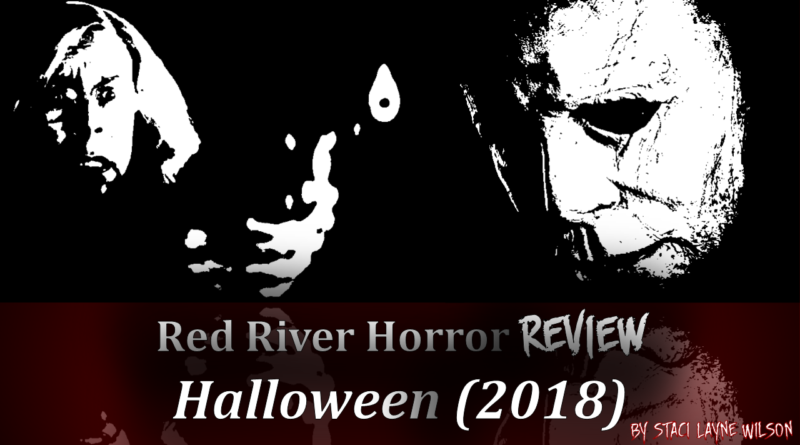 What a clever, refreshing idea: Bring back final-girl Laurie Strode (Jamie Lee Curtis) and butcher knife brandishing Michael Myers (James Jude Courtney) 40 years after the events of that fateful, deadly Halloween night and wiping the slate clean as if none of the sequels or prequels exist. The notion works wonders on a tired franchise and celebrates what we love about the first film: the dynamic between Laurie and Michael.

John Carpenter’s 1978 masterpiece is masterfully revived in H40 by director David Gordon Green and his cowriters Danny McBride and Jeff Fradley. The latter two are known mainly for comedy, so I suspect the moments of levity are their doing—and it works. Fortunately the movie is not goofy and the humor feels organic to the situations. What they do incredibly well is focus on the characters and build upon their personalities, adding a few unexpected twists along the way. There are also some meta moments, but they are brief and we are allowed to be in the present scenario most of the time.

Joining the survivor and the slasher are Haluk Bilginer as Dr. “the new Loomis” Sartain; Jefferson Hall and Rhian Rees as a pair of podcasters obsessed with Strode’s story; Judy Greer as Laurie’s estranged daughter Karen, and Andi Matichak as spirited granddaughter Allyson; plus various mouthy millennials who serve as fodder for The Shape’s scalpel. Then there is scene-stealer Jibrail Nantambu as Julian, a little boy who is convinced the boogeyman is hiding somewhere in his dark bedroom (and guess what? He is).

Even though the movie is made entirely by males, there is a strong and believable impression created amongst the three lead actresses. Laurie, Karen, and Allyson are portrayed as strong women but each are different from one another in how they handle their difficulties. They are disparate at first but then come together as a family united in a wholly satisfying way.

I enjoyed watching all of the well-crafted characters, but H40 really is Laurie and Michael’s show—both come to life in their best iterations since the 70s. Laurie is tough and feral, irrevocably traumatized by the evil entity who changed her life forever, but she is no coward. Michael is much the same, which is a good thing. I understand original actor Nick Castle is back behind the mask in a scene or two, but I am not nerdy enough to have been able to tell which ones. I did not like the mask when I first saw it in the poster but it actually is perfect in the film. I also love that we get glimpses of the man behind the disguise. That was a dicey choice on the part of the filmmakers but it totally works.

The chills and kills are excellent as well, harkening back to the spooky 70s and awesome 80s heyday of the genre. While the violence is brutal and shocking, thankfully it doesn’t belabor the misery and stays true to Myers’ quick, calculated cut-and-‘died’ signature style.

John and son Cody Carpenter’s music is, as expected, note-perfect. The score serves as an homage to the iconic theme but is imbued with its own sense of place and time. DP Michael Simmonds is close to Dean Cundy in sleek style and fall-color but he brings his own magic to the picture with deep blacks and sharp shadows. The props and sets are magnificent thanks to Richard A. Wright and we get to see them all in their glory, which is not always the case in horror films. The atmosphere is lush and creepy—even if it doesn’t always make sense (for instance, Laurie has a bunch of mannequins inside her house… too-eerie décor for someone who’s scared of the boogeyman… but I liked them anyway).

H40 is certainly the best since the original, poising itself perfectly to please the diehard fans as well as winning new ones.