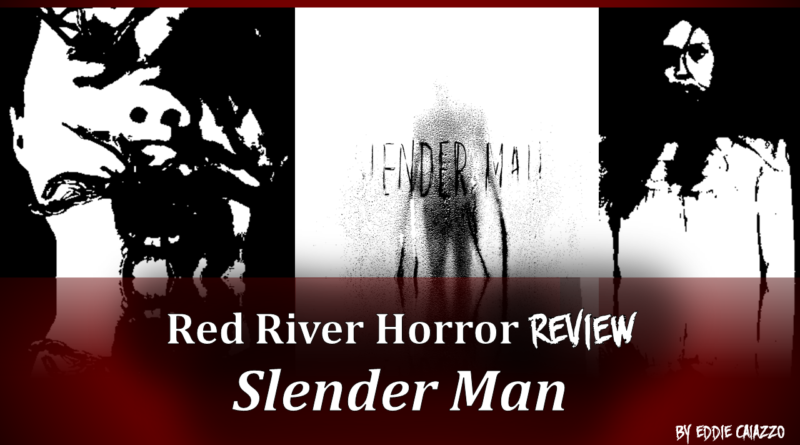 It’s strange how long it has taken for the internet-famous “Slender Man” to make his way to the big screen.  Unfortunately, though, the character rose to fame for the wrong reasons.

Reality: In 2014, a then-12-year-old Wisconsin girl was stabbed 19 times by two female classmates of the same age.  This attack took place to “please Slender Man,” according to the young attackers.  Thankfully, the victim survived.  This event rocked the entire country, and was terrifying on a level that far surpasses any work of fiction.

The film Slender Man in no way plays off of the tragedy.  But it does use some of the lore that has been built up since the character’s creation in a 2009 photo by Eric Knudsen.  For the full history of the most famous creepypasta figure on the internet, refer to Caitlin Dewey’s article in the Washington Post.

Slender Man begins as one would expect any modern PG-13 horror film would; four high school-aged girls visit a creepy website and watch a video.

Viewing this video is supposed to unleash the tall, multi-armed, blank-faced Slender Man (Javier Botet, The Conjuring 2) into their minds.  All is fine at first.  That is until a week later when one of the girls, Katie, played by Annalise Basso (Oculus), goes missing.  Strangely, her disappearance occurs in broad daylight on a school field trip.

Wren, played by Joey King (The Conjuring, Wish Upon), is convinced it’s the Slender Man that kidnapped her friend.  She believes almost immediately in the supernatural manner in which the legend operates, and develops a plan to get Katie back; she convinces Chloe (Jaz Sinclair, The Vampire Diaries) and Hallie (Julia Goldani Telles) that the three of them should head into the forest and sacrifice something they love to the Slender Man.

Legend has it that when one summons the big guy in the forest, nothing bad will happen to them if they just don’t look at him.  Wren finds a simple solution to this, wisely dons a blindfold, and convinces her friends to do the same.  But when the cicadas stop hissing and all goes quiet, a cracking noise breaks the silence.  An ominous presence then bears down on the girls, prompting Chloe to throw off her blindfold and hightail it out of there.  She makes it out of the forest alive…but not without catching a glimpse of the blank-faced figure.  From here on out, the three girls realize they shouldn’t have watched the creepy online video.

At the beginning of the film, the poor acting gave me the impression that I was in for another throw-away summer horror flick.  The dialogue was predictable and poorly written.  That impression thankfully faded after the first act.  When the story got moving, the young actresses pulled it together and made their performances count.  Even when David Birke’s script didn’t offer much room for development.

The story itself also doesn’t have much depth.  That could be taken as a good or bad thing.  It’s good if you were just looking to get some thrills by watching a horror flick called Slender Man with no expectations.  It’s bad if you’ve heard of the stories surrounding the figure, and were hoping to understand why he’s scary and has influenced young minds in real life to commit heinous acts in his name.

If you’re looking for the former, director Sylvain White delivers an overall good product.  The Slender Man appears at the right times offering some unexpected jump-scares.  The pacing of the film could be taken as slow, but it is appropriately slow, and not boring.  And 93 minutes is a perfect length for this type of tale.  Finally, I really enjoyed the visual presentation.  The grey colors of the forest are perfect for a modern urban legend –or creepypasta character — to appear.

Slender Man has its challenges, and doesn’t really beckon to be seen in theaters.  But it shouldn’t be overlooked as an autumn season rental.