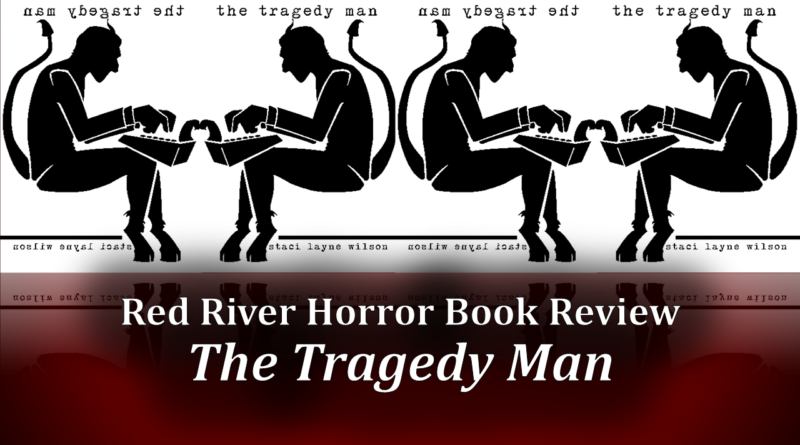 Wannabe “Great American Novelist” Cary Bouchard “slums it”, signs a contract with Old Scratch Press, then becomes an overnight sensation with the release of two Stephen King-esque novels.  And my first assumption was that this was going to be another Faustian / SCREWTAPE LETTERS-like supernatural thriller. But, as the story progresses, there’s mounting evidence of a more naturalistic PSYCHO II / JENNIFER 8-like psychological game wherein a crazed individual may be gaslighting our protagonist into appearing guilty of a series of sex murders.  The third possibility is a Stevenson-inspired JEKYLL / HYDE scenario wherein Bouchard – who is as appalled as everyone else – may be in denial that he is the twisted killer.

The appearance of a ‘mysterious visitor’ in the final act tips the scales (for me personally perhaps a little too obviously and too soon), but this seems intentional as one of THE TRAGEDY MAN’s greatest strengths remains its insistence in making the horror thriller fun again; and not just humorous or pun laden.  Many so-called thrillers of late – both novels and films (Eli Roth, THE PURGE and SAW anyone?) – are effectively grim and creepy, but not “fun“.  Whereas say THE EXORCIST, TEXAS CHAINSAW MASSACRE and even Dario Argento’s SUSPIRIA (hardly light or jokey) possess a rollercoaster glee in taking the audience on a macabre ride. From Poe to King to Clive Barker (some of them getting fictitious shout-outs in THE TRAGEDY MAN), great horror fiction accomplishes this. Wilson’s novel does the same.

While the audiobook version features a deceptively soothing read by actor Andy Garrison (“deceptive” because somewhere in that mellifluous voice one can detect a diabolical wink), I’ve always been more a fan of readable text, especially when it comes to thrillers. It’s often not just the story, but the manner in which the story is laid out on the page which accounts for so much of it’s effectiveness. In this regard, Wilson keeps things lively by occasionally altering her story’s “voice” via textual presentation. And this by extension controls the pace at which the eye glides down the page; it encourages the reader to take timed breaths, which carries a great deal of emotional / psychological weight. Y’know, that old saying about “silences speaking as loudly as music”. The opening chapters with Cary’s dead-end job read like a prisoner’s journal, while the excerpts from his first Gothic success VENGEFUL GHOST captures the elegance of Shirley Jackson; and his THE BRANDIE KILLER has the rat-tat-tat visceral-ness of King’s CUJO. All things considered Wilson’s THE TRAGEDY MAN (equal parts Clive Barker and Nathaniel Hawthorne) is one of the most enjoyable reads I’ve experience in some time. Kudos!