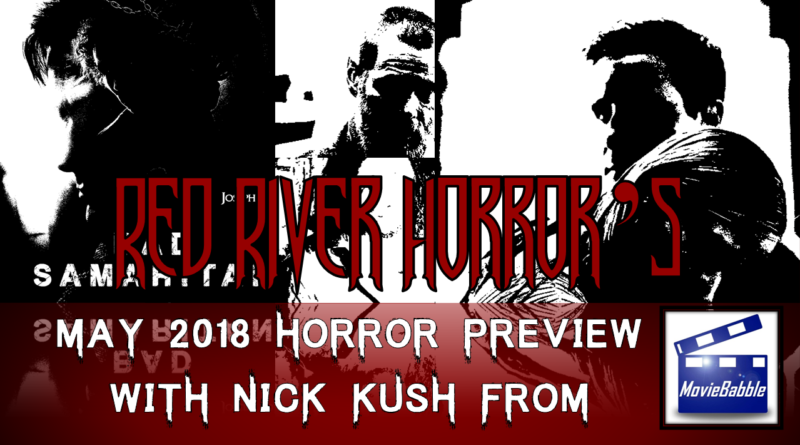 While Infinity War will continue to destroy everything in its path for weeks to come, the film industry keeps chugging along into May, the month that is typically considered the start of the summer movie season.  With such blockbuster films on the way, there’s always plenty of opportunities for counterprogramming.  After all, not everyone wants to see more superhero and Star Wars movies (even if the box office might say otherwise).  With that in mind, let’s take a look at what the May 2018 horror preview has in store for us:

Obviously titled as a play on the classic biblical story, Bad Samaritan follows a valet car park that has developed a less than ideal practice of robbing people’s homes as they eat at the restaurant.  Things are going smoothly for awhile, but then take a quite a turn.  While robbing one guest that’s having dinner at the restaurant, the car park finds a girl being held captive in the man’s home.  Afraid of going to jail himself, the car park calls the police to investigate, but they find nothing.  Now, the valet must endure the wrath of the man and elude him at every turn while trying rescue the unknown girl.

If Bad Samaritan isn’t playing near you, look for Family Blood on Netflix.  In the film, the struggle of a recovering addict named Ellie turns lethal for her two children as Christopher — a so-called addict of another breed — takes her down an even darker path.

Director’s Cut is notable for a few reasons.  For one, it’s from Penn Jilette, the vocal half of the famous Vegas magic act Penn and Teller.  What makes this project even weirder is that the film premiered at a few festivals back in 2016 and didn’t get distribution until now, so everyone can a get look at all the genre-blending madness some have claimed as the ultimate “meta-movie.”  Weirdly enough, this crowdfunded project also includes crowdfunding within the film itself in a story that involves kidnapping over a shoddy script.

Also coming out this weekend is Dark Crimes which follows Jim Carrey as a detective that starts to notice similarities between a real murder case and one outlined in a popular book.  From there, he descends into a world of sex, lies, and corruption that leads to a deadly truth.

Netflix is really pushing counterprogramming to the theatrical releases in May, and that’s definitely a smart play for the streaming service as they continue to crank out content.  The film they’re releasing this weekend is entitled Cargo and stars Martin Freeman in the aftermath of a pandemic in Australia.  Stranded in the countryside, Freeman’s character frantically searches for a new home for his infant child as his body chemistry slowly changes from the disease.